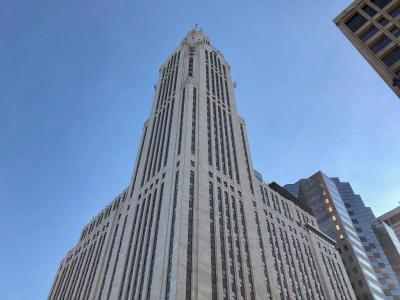 At 47 stories high, LeVeque Tower is the seventh tallest skyscraper in Ohio and the second tallest building in Columbus. It was the tallest in the state from the time it was built through 1974 when it was replaced in status by the 624 foot high Rhodes State Office Tower.

LeVeque Tower was constructed in 1927. It was designed in an Art Moderne architectural style by C. Howard Crane. It was commissioned by the American Insurance Union, which is why it was originally called the American Insurance Union Citadel. The building was eventually purchased and owned by the LeVeque family, who were prominent real estate owners and developers in the city. It underwent many changes in tenants over the years, from radio stations to State of Ohio government offices.

Those wishing to view LeVeque Tower can see the building from many spots in the city. It is easily accessible by foot for those walking along the Scioto Mile Promenade's greenway or walking from the Ohio Statehouse.
Image Courtesy of Wikimedia and w_lemay.