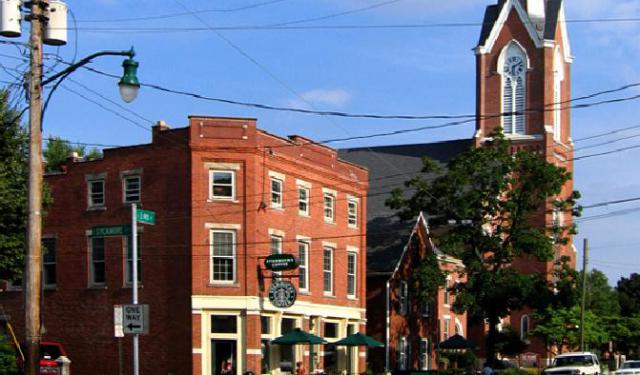 One of the oldest and most treasured historic neighborhoods of Columbus, the laid-back German Village is known for charming brick houses built by German settlers along Beck, Mohawk, and Deshler streets in the early-to-mid-19th century. Many of the local buildings – boutique shops and art galleries, pubs, restaurants and coffee shops – look exactly the way they did 150 years ago thanks to a meticulous historic preservation effort. If you want to learn more about Columbus' immigration history and explore this lovely area, take this self-guided walking tour!
Image Courtesy of Flickr and Postdlf.
How it works: Download the app "GPSmyCity: Walks in 1K+ Cities" from iTunes App Store or Google Play to your mobile phone or tablet. The app turns your mobile device into a personal tour guide and its built-in GPS navigation functions guide you from one tour stop to next. The app works offline, so no data plan is needed when traveling abroad.

South of downtown Columbus is the German Village. This area was settled in the mid-1800s and added to the National Register of Historic Places in 1974. All of German Village deserves to be explored and enjoyed on foot. However, there are a few standout places that cannot be missed. One of these spots is Schwartz Castle.

Schwartz Castle is a stately home in the German Village. Located on Third Street, the home was originally owned by apothecary shop owner Frederick Schwartz. Thought to have been driven mad after jilted by his fiance, Schwartz began adding basement levels to the home, a total of five, as well as a series of underground passageways. Though the home is now divided into offices and condominiums, it is also thought to be one of the most haunted places in the city. People say they continue to see Frederick Schwartz strolling through the house and sitting atop the flat roof though he died many years ago.

Those who aren't fond of ghost stories can still admire the architecture of the building. Though it is not possible to tour the underground areas to see the strange tunnels, it is worthwhile to pass by the building on foot to admire the beauty of this castle.

Image Courtesy of Wikimedia and Columbusite.
2

Third Street is the heart of Columbus's German Village. The street runs north from Schiller Park. From there it cuts through German Village through Livingston Avenue. Along this route, visitors can see a wide number of retail shops that provide the perfect place for souvenir shopping.

Diners and delicatessens also populate this street and offer a taste of traditional German food. Pay special attention to Katzinger's Delicatessen, which is a spot for photo ops among visitors to the city. Thurman Cafe has been in continuous operation since 1942. This locally owned restaurant is known for its massive Thurminator burger that contains 24 ounces of hamburger meat along with numerous sides and toppings.

The Book Loft is one of the most popular stops on Third Street. Saint Mary Church is another place that all tourists should stop and admire. In addition, visitors will see a wide number of older, German-inspired houses. Many of these have been converted into commercial establishments, but others continue to serve as homes.

3) The Book Loft of German Village

The Book Loft of German Village is a popular spot along the neighborhood's Third Street. It is considered one of the largest independent book stores in the country thanks to its occupation of multiple pre-Civil War era buildings. The buildings that are now known as The Book Loft were once a nickelodeon, a saloon and a general store.

The Book Loft has 32 rooms that are devoted to books as well as a few non-book novelties. The store stocks new prints, closeout books, small press books and even rare and signed copies. Each room specializes in certain types of books, from philosophy to cookbooks to young adult. The store also boasts the largest selection of children's books located in any independent bookstore in the nation.

Those who aren't sure what books they want or who don't have time to explore this massive bookstore are in luck. Shoppers can purchase a Mystery Box that includes hand-picked selections based off of the shoppers' interests.
Image Courtesy of Wikimedia and Postdlf.
4

Saint Mary of the Assumption Catholic Church is a mid-19th century church building that reflects the German architecture from days gone by. Groundbreaking on this church occurred in 1866, though the spire wasn't added until 1893. In 1894, a clock was added to the tower, which completed the church's construction.

Those interested in viewing the exterior of the church will find a neatly manicured lawn, arched windows and doors and ornate stained glass windows. Visitors who would like to see the interior of the church may do so by attending one of the church services. Those visitors will see 10 painted ceiling panels, oil frescoes, a 12-foot long crucifix and a 20-foot wide white walnut altarpiece.

Any member of the public can attend church service at Saint Mary. Vigil mass is every Saturday at 4 PM. Sunday services are held at 9 AM and 11:30 AM. Visitors can also tour the Saint Mary Church and School Alumni Museum between the two Sunday masses.
Image Courtesy of Wikimedia and Nheyob.
5

Schmidt's Sausage Haus boasts "real German food" that has been offered since it was first opened in 1886. Not only has the restaurant been in operation since the late-19th century, but it has been in the same family as well. Five generations of Schmidt's have carried on the tradition of offering German cuisine and hospitality to residents of and visitors to Columbus.

Schmidt's as a brand and company has grown to include a catering business, a food truck, a banquet hall and online orders. However, it is the original location that deserves a visit on a tour of the city. Visitors who stop at Schmidt's can select from a menu that includes German classics like the Old World Sausage Sampler, Hoffbrau Schnitzel or a Knockwurst sandwich. Desserts include favorites like apple strudel and German chocolate cake.

Schmidt's is also known for its pub. The restaurant offers traditional German beers to be served on their own or with a meal.
Image Courtesy of Flickr and Dr Bob Hall.
6

Schiller Park is the largest green space in German Village. It is more than 23 acres of land that has been used as a public gathering space since about 1830. It was originally called Stewart's Grove, due to being owned by Francis Stewart. The name change came in 1891 when the park was dedicated to Friedrich Schiller by the area's German residents.

There is a statue of Schiller in the park, which was placed at the time of its dedication. This statue was cast from an original that is located in Munich. Another statue, called Umbrella Girl, is a well-known and much admired part of the park.

Along with open green space, Schiller Park includes a fishing pond, a performance stage, a playground, basketball and tennis courts, gardens, picnic areas and a gazebo. There are also numerous walking trails that take visitors throughout and around the park.
Image Courtesy of Wikimedia and neighborhoods.org.