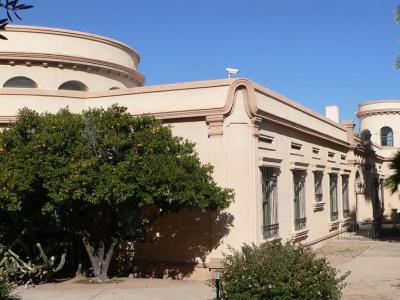 The Levi H. Manning House was built during the turn of the 20th century. The home was created in an area called Snob Hollow and was originally a 12,000 square foot mansion. Since that time, it has been expanded into a 30,000 square foot space that functioned as an events center. Today it is a popular spot for visitors on walking tours of the city.

Levi H. Manning was mayor of Tucson. He built his fortune in mining, but was also active in the early days of electricity. He is credited with using an electric trolley system in the town to replace the horse and buggy.

The home is not currently in use or open to the public, but it has been used as a headquarters for the Elks Lodge and as a special events venue. Those on walking tours will marvel at the unique combination of Spanish Colonial, Italian Renaissance and Santa Fe Territorial architecture. Visitors can also spot frescoes featuring motifs of exotic birds and flowers that were painted by the artist Salvador Corona.

Some tourists may go on a ghost hunt at the Levi H. Manning House. Its reputation as a haunted house has endured for decades. Visitors have claimed to see apparitions floating by holding candlesticks before disappearing once again.
Image Courtesy of Wikimedia and Ammodramus.