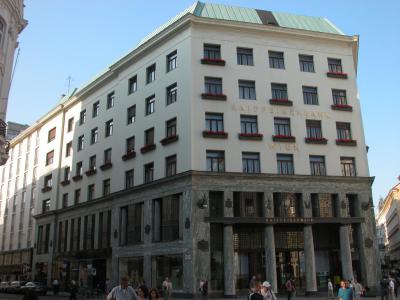 Designed by Adolf Loos and erected in 1910-12 on imposing Michaelerplatz, this building so outraged the Emperor Franz Joseph, who lived across the road, that he not only avoided it for the rest of his life, but also ordered the curtains of his windows to remain permanently shut. The source of the emperor's indignation was the starkly functional upper façade, which contrasts dramatically with the imperial square's ornate Baroque exuberance. The Viennese called it "the house without eyebrows", since the usual window roofing/detail was missing entirely. Work was allowed to continue only after Loos agreed to add the 10 bronze flower boxes adorning the façade today.

Despite its aesthetic functionalism, the building is not as merely functional as it may seem – especially in the materials used for the ground floor (Cipollino and Skyros marble) and the Tuscan columns on street level, intended as an allusion to the portico of St. Michael's Church. The interior decoration remains a breathtaking surprise, having been restored and brought as close as possible to its original condition, with no fear of cost. Because the building now houses a bank, one can only 'tour' the ground floor exhibition of its history, and gaze wistfully at the magnificent wooden staircase.

Tip:
To really get up close and personal with Adolf Loos, head to the splendor of his LOOS AMERICAN BAR (12pm–4am daily), about six blocks east at No. 10 Kärntner Durchgang. Come have a classic cocktail as they were crafted over a century ago; stay for the ambiance and the design.