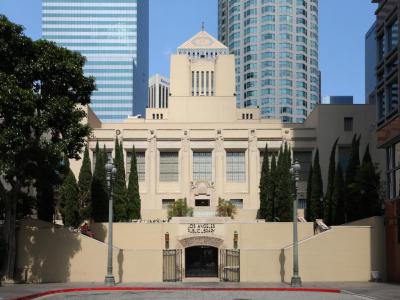 The historic Central Library Goodhue building was constructed in 1926 and is a Downtown Los Angeles landmark. The Central Library was designed by the architect, Bertram Goodhue. The Richard Riordan Central Library complex is the third largest public library in the United States in terms of book and periodical holdings.

Architect Bertram Grosvenor Goodhue designed the original Los Angeles Central Library with influences of ancient Egyptian and Mediterranean Revival architecture. The central tower is topped with a tiled mosaic pyramid with suns on the sides with a hand holding a torch representing the "Light of Learning" at the apex. Other elements include sphinxes, snakes, and celestial mosaics. It has sculptural elements by the preeminent American architectural sculptor Lee Lawrie, similar to the Nebraska State Capitol in Lincoln, Nebraska, also designed by Goodhue. The interior of the library is decorated with various figures, statues, chandeliers, and grilles, notably a four-part mural by illustrator Dean Cornwell depicting stages of the History of California which was completed around 1933. The building is a designated Los Angeles Historic-Cultural Monument, and is on the National Register of Historic Places.
Image Courtesy of Wikimedia and Matthew Field, http://www.photography.mattfield.com.
Sight description based on Wikipedia.