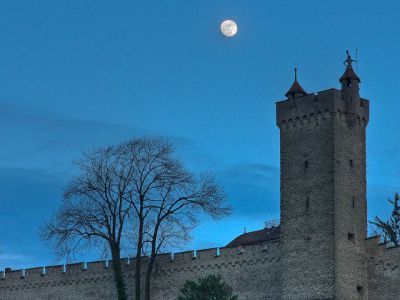 The Luegisland Tower was built in 1290, long before the other Musegg Wall sisters. At the height of 52.6 meters, it is the tallest of them.

Also previously referred to as the Countryside Viewpoint, the Luegislandturm lived up to its name (literally: “Look toward the land”), serving to protect the town from both enemy attack and fire hazard in the old days. For that, a guard – known as "Luegisland" – lived in the tower full-time, along with his wife – "Luegislandin". Usually, they also employed a journeyman.

Their job – watching out for fires, striking hours, and other duties – was quite important and implied strict specifications. According to the ordinance of 1447, the first watchman must report to duty when the evening bell rang and “not go to sleep until his partner was fully awake and out to stand the post”. Those off duty had to rest somewhere within the tower and be ready to respond to the call of other guards' (in the city) at all times.

Despite several minor modifications throughout centuries, the current structure largely corresponds to its original design. The exceptionally well-preserved masonry is pretty much in the same condition as it was when first built. In some places, the centuries-old scaffolding timber is still visible. There is practically nowhere else in the country that you can see a “time capsule” like this in such an unadulterated form. Among other things, the tower has a weathercock, pointing left to right, atop the peaked roof.

The Luegislandturm served as a watchtower until 1768. In 1874, a well room with reservoir was built in. In 1924 the city council decided to install a pressure-reduction system for the municipal water supply here. Today, a high-pressure pipeline runs beneath the tower; hence it is no longer open to the public.
Image Courtesy of Flickr and Daniel Haslimann.