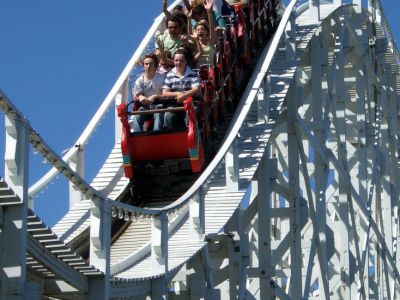 Luna Park has been entertaining Melbourne since 1912, and is one of Australia’s best loved institutions. It was the first of four Luna Parks in Australia, but the St. Kilda and Sydney Harbour parks are the only two remaining. The delightful original façade of the park features the laughing Mr. Moon face supported by two towers – you enter the park by walking through his smiling mouth. Once inside the park there is a mixture of rides, side show games and entertainment on offer. History buffs as well as thrill seekers enjoy a ride on the Scenic Railway, which is the world’s oldest continuously running roller-coaster, dating from 1912 when the park opened. The carousel is another historical ride at the park, which dates from 1913; the Ghost Train opened in 1934 and the dodgems opened in 1927.

Luna Park is now listed with the National Trust of Australia for its important place in the nation's history. But the park is not all about the past; there are plenty of new and up-to-date rides to be had there too. Other popular rides include the Holodeck, Red Baron, Coney Island Top Drop and the Twin Dragon. Luna Park is open at different times throughout the year, with extended opening hours in summer.
Image by Stevage on Wikimedia under Creative Commons License.