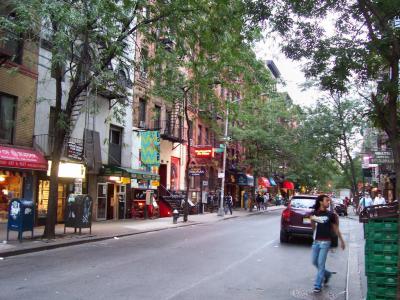 A legendary slice of New York nightlife, MacDougal Street was the dynamic heart of Greenwich cultural life from the 1920s to the '70s, and though it remains clogged with cafés, dives and delicious restaurants (plus interesting record stores), its current patrons are more likely to be students looking for variety, than aspiring artists.

The spirit of rock 'n roll is alive at CAFE WHA? (Sun-Thu: 8pm–2am; Fri, Sat: 8pm–3:30pm), a former haunt of famed poets and musicians, where Bob Dylan and Jimi Hendrix used to jam. With their own fusion of rock, soul, and reggae, the house-band are an absolute joy, and if you stay long enough, you will hear something that you like. The servers are quick with the drinks; as for the food, it's probably better to eat before going if you're hungry.

Check out the variety of mouth-watering eateries on MacDougal St, like MAMOUN'S FALAFEL (11am–5am), renowned for its tasty, inexpensive Middle-Eastern fare (priced for college kids but of the highest quality) or, if you're looking for delicious authentic Indian street food, THE KATI ROLL COMPANY and/or THELEWALA. Family treats include the MINETTA TAVERN, a welcoming upscale bistro with a menu based on top tier ingredients. If lucky enough to score a reservation, you'll get an opportunity to eat the perfectly crafted hamburger prepared with two different types of meat – one very expensive and the other extraordinarily expensive, but both worth it.

Reservation is the key to the COMEDY CELLAR, also. Neither the fare or the drinks are particularly noteworthy, but that's really not why folks go there. A world-renown comedy club with a top-notch show, the venue has a good intimate feel to it, and you never know who could spring up and drop a quick 10-15 minute set. Great talents such as Jerry Seinfeld, Louis CK, Aziz Ansari, or Dave Chapelle come here spontaneously to entertain the crowds. Don't plan on taking photos, recording video or audio.
Image by Steve Santore on Flickr under Creative Commons License.

Home to some of the world’s best entertainment, New York City has no shortage of celebrities calling it home either. In some parts of Manhattan, you can pass by celebrity homes without even realizing that you are mere yards away from the stars. One such area is the former industrial neighborhood in Lower Manhattan, called Tribeca, currently considered to be a haven for celebrity residents. In...  view more

Midtown Manhattan is the largest commercial, entertainment, and media center of the United States. The area is a home to some of NYC's most iconic landmarks, such as the Empire State Building and Chrysler Grand Central Station, as well as the world-famous Rockefeller Center and Times Square. Follow this self guided walk to explore Midtown Manhattan!