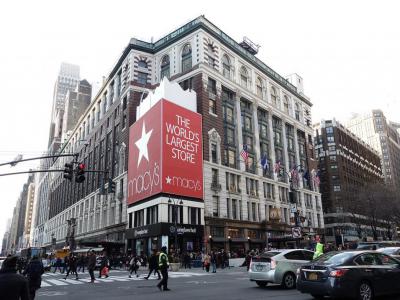 Since its opening in 1902, the legendary Macy's flagship store in Herald Square has been a shopping paradise for visitors and an architectural icon and landmark of New York City. A store like no other, it has continued to be a trendsetter from its inception and was the first building to have a modern-day escalator. With 1,250,000 square feet of retail space under one roof, Macy's is one of the largest department stores in the United States. It was added to the list of National Historic Landmarks in 1978.

The store covers an entire city block with 11 levels of the latest fashions, featuring a dazzling array of designer brands, choices, and quality which never fail to amaze. Restaurants and cafes can be found throughout the store, and exciting events are held here almost every day.

The place is also famous for its elaborate animated holiday and Christmas window displays. Each year presents a different theme shown in six windows on the Broadway side of the building.

Macy's is known for its great sales, especially compared to other major New York City department stores. If you crave some refreshment or feel like having a bite, there are plenty of dining options to consider, from casual, fast-food eateries to the more refined sit-down restaurants, so there's no reason for you to go hungry or thirsty while shopping at Macy's.
Image Courtesy of Wikimedia and Tdorante10.