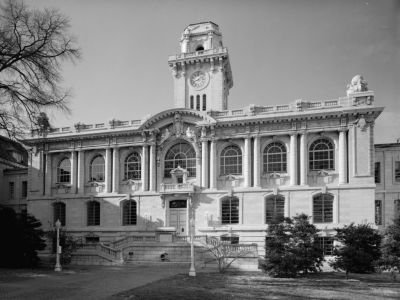 Mahan Hall is one of the three halls of the academic complex of Mahan, Sampson and Maury Halls on the territory of the United States Naval Academy. It was built in the early 20th century to the design by Ernest Flagg, featuring a beautiful Beaux-Arts style architecture with an outstanding clock tower, and was named for the United States Navy flag officer, Alfred Thayer Mahan.

Famous flags of the U.S. Navy and captured flags from enemy ships are displayed throughout the academy. Mahan Hall holds the only British royal standard taken by capture, at Toronto (then York) during the War of 1812. Opposite the Hall, at the end of Stribling Walk, is the Macedonian Monument, the figurehead of HMS Macedonian, the British ship defeated in battle by the United States frigate on 25 October 1812. Alongside the old library, which is now turned into a lounge and meeting room, located in the Hart Room, Mahan Hall is also home to the midshipman theatrical company, The Masqueraders, who use it to stage their annual production.
Image by John T. Lowe on Wikimedia under Creative Commons License.