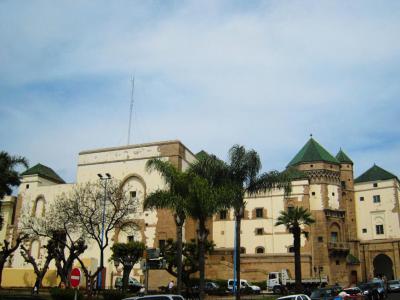 Mahkamat al-Pasha in Arabic means, "the Pasha's Courthouse." It was built in the early years of World War II, specifically 1941-1942. Since it was wartime, modern building materials were scarfed up by the French government. The courthouse was put together using traditional methods and materials.

The Pasha of Casablanca at the time was Al-Tayyib Al-Moqri, number two son of Grand Vizier Muhammed al-Muqri. The second son desired a courthouse to be built in the Habous, a neighborhood of the city traditionally dedicated to charitable and cultural interests. The building was to be a complex serving as residence, courthouse and jail.

The decision to build was made in January 1930. The design was by architect Auguste Cadet. Cadet was deeply involved in the planning and building of Casablanca. Like most other of Cadet's projects in the city, the complex shows typical Moorish-Andalusian architectural elements: ZeleeJ tiles, stucco, carved cedar and green tile roofing.
Image Courtesy of Wikimedia and Radouane.