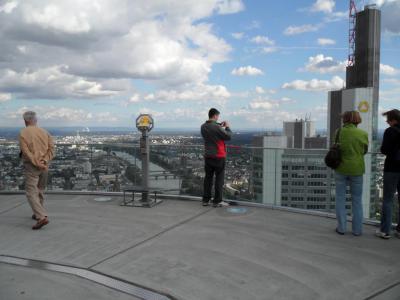 Named after the nearby Main, the Main Tower is a 56-storey, 200 m (656 ft) skyscraper, the 4th tallest building in Frankfurt and all of Germany. Complete with its antenna spire, the building stands 240 m (787 ft) high. The tower has five underground floors and two public viewing platforms, and is the only skyscraper in Frankfurt with a public viewing observatory.

The building's design features what appears to be two connected towers: the smaller, cuboid one with a glass façade, common to the 1970s' architecture; and the second, taller one, of a circular shape clad entirely in blue colored glass, featuring the transmission tower on top.

Construction of the Main Tower began in 1996 and was completed in 1999. The tower has 55 floors with functioning windows making it an eco-friendly modern high-rise structure. The building houses the offices of several German and international banks, and is virtually the financial center of Frankfurt. There are also a television and radio stations. During TV weather reports, the reporter stands on top of the building.

In the foyer, there are two art pieces accessible to the public: the video installation by Bill Viola "The World of Appearances" and the wall mosaic by Stephan Huber "Frankfurter Treppe / XX. Jahrhundert" ("Frankfurt's Steps/20th century").

Visitors to the observation deck at the top floor are encouraged to take a map to spot Frankfurt’s numerous landmarks from atop. One floor below is a restaurant and bar with large windows offering panoramic 360-degree panorama of the city. On clear days you can see as far as the Mainz, Wiesbaden, Hanau, and Taunus Mountains.

Why You Should Visit:
There are a few elevated places in Frankfurt which provide amazing views of the city, but the Main Tower has to be the tallest and the best amongst them.
Unlike some other observation decks, the top of the Main Tower is completely open other than a low railing. There's no glass between you and the sky.

Tip:
Go before sunset to see Frankfurt in daylight and 20 minutes later in the light of a big city.
Also, make sure to wrap up if going during the colder months.