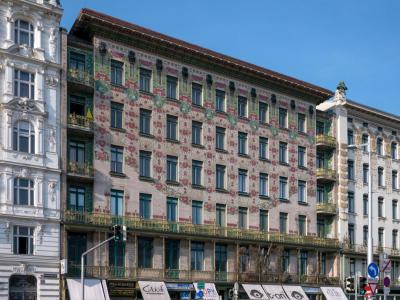 The so-called Majolica house is the inspiration of the legendary architect and designer Otto Wagner during his secessionist phase of design. The name of the building derives from the flowing flower motifs on the tiled outside façade that embellish the place with beautiful shades of green, blue and pink.

Wagner made this new style of architecture famous for its simple, yet elegant design. Exterior walls were left smooth and flat, and windows typically became less ordained than in previous Viennese styles of architecture. The simple, clean look was meant, in some fashion, to be representative of how clean and simple the apartment complexes were on the inside. Despite its rectangular shape, the beautifully maintained building was and still is considered an Art Nouveau masterpiece today.

Another secessionist creation is a corner house at No. 38, with reliefs from Koloman Moser and gilded stucco medallions from Othmar Schimkowitz. Nearby is a third house, simpler than these, at 3 Köstlergasse, said to have been the town residence of Wagner for a time, and, finally, you can put Wagner's functionality to the test by going down into his Kettenbrückengasse subway station.

Tip:
Visit on a bright day and take binoculars to fully appreciate the detail under the eaves and the balcony areas.
Image Courtesy of Wikimedia and Thomas Ledl.