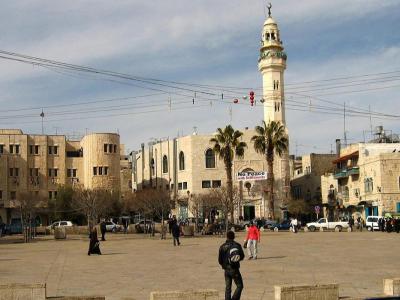 Manger Square is one of the top tourist destinations in Bethlehem, located in the heart of the Old City. Throughout the year, this central plaza plays host to many public events. Apart from being a hub of modern life, featuring cafes, shops and restaurants, souvenir stores, Bethlehem Peace Center and Municipality building, this square is popular primarily for being flanked by the landmark religious sites, such as the 4th century Church of the Nativity (dominating the eastern side), the Church of St Catherine (on the western side), and the Mosque of Omar.

The latter is relatively modern, built only in 1860, and has a lovely story associated with it. The mosque is named after Caliph Omar whose Arab armies conquered Byzantine Jerusalem in 637 A.D. After capturing the city, the caliph prayed inside the Church of the Nativity, declaring that the Christians would thenceforth be allowed to continue freely practicing their faith in this important shrine.

Strolling along the narrow, full of character alleyways of the Old City, lined with the beautifully ornamented, centuries-old stone buildings (which are not just architectural landmarks but the real homes of Bethlehemites) can be an interesting activity – a kind of travel back in time, recalling, among others, the events of the Nativity Story!
Image by adriatikus. GFDL or CC-BY-SA on Wikimedia under Creative Commons License.