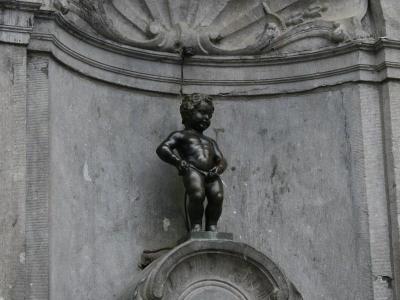 Cast from bronze, the small statue of a naked boy urinating into the basin of a fountain, known as the Manneken Pis or “Little Man Peeing”, is probably one of the most popular landmarks of Brussels. Created in 1619 by the Brussels sculptor Hieronymus Duquesnoy, this statue has been renowned for both, its humor and the various legends associated with it.

One of them claims that it commemorates a young boy who urinated on a burning fuse to prevent an explosive charge from detonating and destroying the city’s fortification walls. Another story tells of a rich merchant whose son had disappeared and, after an extensive search throughout the city during which the lost boy had been found happily urinating in a garden, the statue was presented, reportedly as a token of appreciation, by the boy’s father to the townspeople for helping with the search. Another version suggests that a young boy woke up to a fire in the king’s castle, urinated on it, putting out the fire, and thus saved the castle from burning down.

At some point, the statue was stolen, and what we see today is a copy made in 1965. The original is housed in the Maison du Roi ("King's House"), aka the Brussels City Museum. To delight multiple visitors, several times a week the little man is being dressed up in a different costume. To this date, it has worn the total of over 500 costumes.

Why You Should Visit:
To see the most overrated tourist attraction in the world – blink and you'll miss it.

Tip:
To complete the trifecta you should also visit Jeanneke Pis (pissing girl) and Zinneke Pis (pissing dog). Jeanneke Pis is about 550 meters away from Manneken Pis (or about 300 meters from Grand Place) and the pissing dog is also about 550 meters away, but in a different direction.
Image by Stylva on Flickr under Creative Commons License.
Sight description based on wikipedia