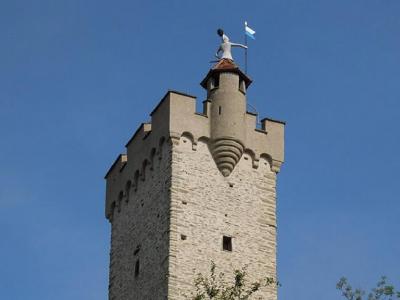 The second tower on the ascending Musegg Wall ridge is Männliturm. This tower got its name from the small – half-length, two-meter-high – figure of an "iron man" (Männli means “little man”) clad in the knight's armor and holding a flag and a sword in his hands. This merry warrior, sitting atop one of the two oriel turrets in the battlements, is known to everyone in Switzerland.

The Männliturm was built around the 15th century (exact year is unknown) and has not changed its shape ever since, except for the roofs of the oriel turrets – renewed in 1537. Also, the original monopitch roof was replaced with a reinforced concrete slab in 1934. The most recent renovation took place in 1951, after a lightning strike.

From 1847, the “Little Man” was used by the Swiss Army – fitted with an optical telegraph for military communication – way until after the Second World War.

Inside the tower is divided into four floors. The bottom floor – half-walled – opens towards the city and has rectangular loopholes on the outer wall to fend off the enemy attack.

The building itself stands 33 meters high, from ground to pinnacle, and is the third tallest in the Musegg Wall. The 125 steps leading to the viewing platform (approximately 30 meters high), offer a spectacular view of the city, Lake Lucerne, Reuss River, and the Pilatus.

The tower has been open to the public since 1978: in summer, from 8 am to 8 pm.
Image Courtesy of Wikimedia and Aniacra.