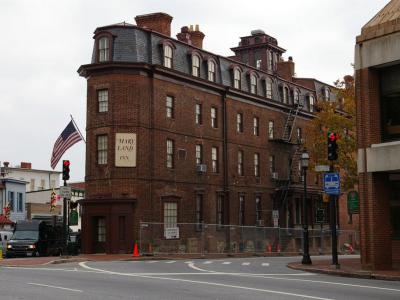 The Maryland Inn – one of Annapolis's main charms – dates back to the end of the American Revolutionary War. Renowned for its unique ambiance, the inn was built in 1720 and has operated continuously to the present day, smoothly combining timeless elegance with modern conveniences. Laid in red Flemish bond brick, the imposing building stands three and a half stories tall, with each floor level emphasized by belt courses. Together with the other two Historic Inns of Annapolis (Governor Calvert House and Robert Johnson Inn), this semi-octagonal landmark is a member of Historic Hotels of America, the official program of the National Trust for Historic Preservation.

In 1772, Thomas Hyde, a respected merchant and civic leader, acquired a long-term lease on a lot on Church Circle, on which he had constructed the front part of what is now the Maryland Inn. In 1782, Hyde advertised it for sale, describing it as "an elegant brick house adjoining Church Circle in a dry and healthy part of the city, this House is one hundred feet front, three story height, has 20 fireplaces and is one of the first houses in the state for a house of entertainment."

The inn remained a popular place for lodging throughout the 19th century. In 1868, it was acquired by the Maryland Hotel Company and remained the most prominent Annapolis hotel and the favorite rendezvous for important national state and military visitors. By World War I, the inn’s facilities had been outmoded and many of its rooms converted into offices and apartments.

Over the next several decades, the building had changed several hands, until in 1953, the new owners, who appreciated the inn’s importance in Maryland’s history and architecture, began its restoration set to preserve the Colonial design whilst fitting it with modern amenities.
Image Courtesy of Wikimedia and MamaGeek.
Sight description based on Wikipedia.