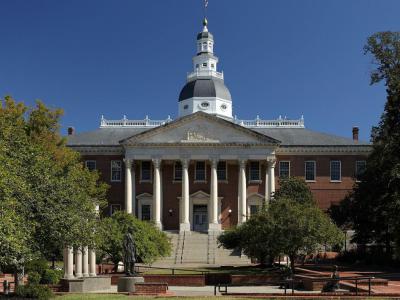 The Maryland State House in Annapolis houses the Maryland General Assembly and offices of the Governor and Lieutenant Governor. It is the oldest state capitol in continuous legislative use, dating back to 1772. The two-story brick structure, in the middle of State Circle, was designed by Joseph Horatio Anderson, a noted architect of the time, in the popular Georgian style of that period.

A small portico juts out from the center of the building and is topped by a pediment; two high arched windows frame the entrance. The dome of the statehouse is depicted on the Maryland state quarter, and has the distinction of being topped by the largest wooden dome in the United States constructed without nails.

The current building, which was designated a National Historic Landmark in 1960, is the third statehouse on its site. Currently, the building is administered by the State House Trust, which was established in 1969.