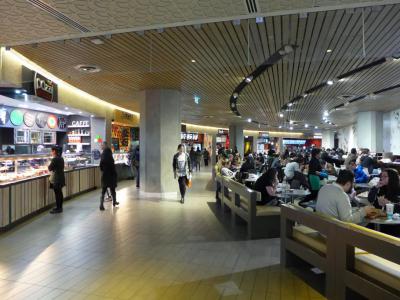 Melbourne Central is a shopping center, but it's also a lot more than a shopping center. Over two city blocks long, it houses over 300 retailers of all stripes, from famous international brands to Australian originals. The glass cone is a city landmark. It was designed in the 1980s by Japanese designer Kisho Kurokawa.

In its center lies the Coops Shot Tower, a bullet manufacturing facility from 1889. The juxtaposition of the red-brick Victorian building surrounded by the ultra-modern glass cone epitomizes Melbourne Central. A giant Marionette watch hangs over the square and building, and the Australian anthem "Waltzing Matilda" is played on the hour.

The entire complex lies atop the City Loop Melbourne Central train station, making connections easy to anywhere in the city.

Melbourne Central has a little bit of everything for everybody. But foodies will especially rejoice in the many dining options within the center. Pretty much every type of cuisine is represented, and there are plenty of bars and snacks to keep you busy all day long.
Image Courtesy of Wikimedia and Wpcpey.