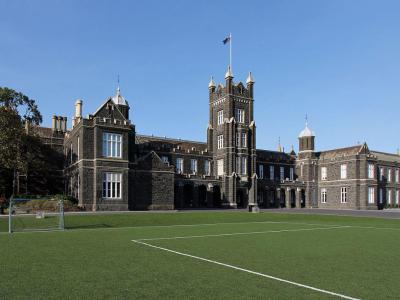 Melbourne Grammar School is one of Australia’s oldest private colleges as well as one of the best regarded Australian educational institutions. The school was founded in 1858 by the first Anglican Bishop of Melbourne, Charles Perry and today has an enrolment of around 1800 co-educational students. The many bluestone original school buildings at the senior campus are now on the Victorian Heritage Register.

In 1893 St. Peter’s Chapel was built on the campus and it was Australia’s first school chapel. The school now has seven campuses including its outdoor recreational center, but it is the original school site on St. Kilda Road right next door to the Royal Botanic Gardens that is the heart of the school.

The school has an archival gallery filled with photographs, records and memorabilia of the school’s history, which may be visited by appointment during term time. The archives are based at the St. Kilda Road campus of the school.
Image Courtesy of Wikimedia and Donaldytong.