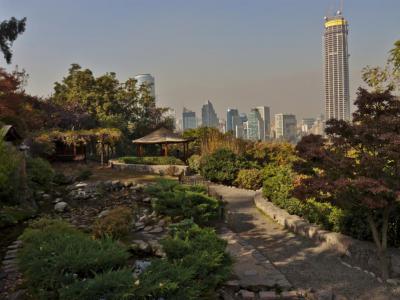 The Santiago Metropolitan Park is an urban park located within the city of Santiago, capital of Chile. Consisting of the San Cristóbal, Chacarillas and Los Gemelos hills, and the areas of Tupahue, Lo Saldés, Pirámide and Bosque Santiago, the park is located between four communes of Santiago - Huechuraba, Providencia, Recoleta and Vitacura - and covers around 722 hectares, making it the largest urban park in Chile and one of the largest in the world. The Santiago Metropolitan Park also maintains 16 Urban Parks distributed throughout 13 communes in Santiago, a total area of almost 150.1 hectares. The maintenance work is carried out through “Urban Parks’ Conservation, Maintenance and Safety” projects which involve cleaning, irrigation, replantation and management of vegetal species, maintenance of urban equipment, sanitation control, weed control, fertilization and safety among other activities. The park was created in April 1966, when incorporating the Chilean National Zoo and the services of San Cristóbal Hill, and is managed by the Ministry of Housing and Urban Development. In September, 2012, the Chilean government launched a plan to significantly refurbish and expand the park between 2012 and 2016, a plan which includes building new footpaths, planting 100,000 more trees and expanding the National Zoo. Metropolitan Park's prime location at St. Christopher's Hill makes it a must-see spot of Santiago. Visitors can take a funicular or cable car up the hill to experience an unforgettable view of the city. At the top of the hill stands a grand statue of the Virgin Mary, a church, restaurants and craft shops.
Image by Phillie Casablanca on Flickr under Creative Commons License.
Sight description based on wikipedia