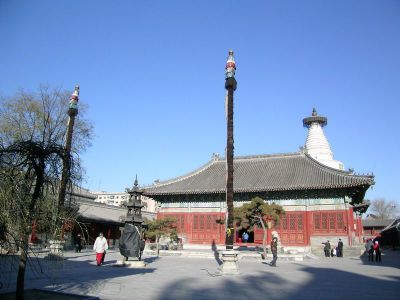 The main feature of the Miaoying Temple is the White Dagoba. There are four halls that contain historically important artefacts such as classical Buddhist scriptures, lifelike Buddhist statues, flowery cassocks, five Buddha’s crowns, fabrics and a lot of other valuables.

Visitors are impressed by the cm high golden Dagoba Longevity Statue studded with 40 rubies. Another important attraction here is the Kwan-Yin Bodhisattva Statue made in bronze. This statue has thousand eyes and hands. Dagoba temple is where a lot of Buddhist scriptures were translated.

During the Yuan Dynasty, this was the imperial temple. Three days ahead of the actual ritual, all ceremonies used to be rehearsed at this temple. During the Qing Dynasty, many temple fairs were held here.

To the north of the temple is the White Dagoba designed by Anigo, the famous Nepalese architect. The Dagoba is a standing example of friendship between China and Nepal that existed during Yuan Dynasty. Today, it is protected by the Chinese State Department. Miaoying Temple and the White Dagoba are sure to leave you speechless and spell bound.
Image by smartneddy on Wikimedia under Creative Commons License.