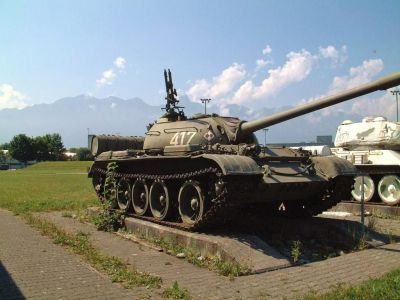 Museum of the Polish Army (Muzeum Wojska Polskiego) is a museum in Warsaw documenting the military aspects of the history of Poland. Created in 1920, it occupies a wing of the building of the Polish National Museum as well as several branches in Poland. It's Warsaw's second largest museum and the largest collection of military objects in Poland. The collection illustrates a thousand years of Polish military history - from the 10th century to the Second World War. The forecourt of the museum houses several dozen armoured vehicles, artillery pieces and aircraft, an eclectic mix of Soviet, western and Polish equipment, mostly from the World War II era. The indoor galleries concentrate on the military history of Poland since the 10th century, and are particularly strong on Poland's era of military greatness in the 17th century, through the decline into anarchy in the 18th century. By far the largest part of exhibition space is devoted to the 20th century, especially World War II. Highlights of the Museum's collection include an extremely rare gilded helmet from the 10th century, which is said to have belonged to a Polish chieftain and the collection of hussars' armour. Additionally there is a permanent exhibition of oriental arms and armour from the museum's own extensive collection, which includes many world-class items from Ottoman Turkey, the Crimean Tatar Khanate, Mongolia and Japan.

Hours: Wednesday: 10 am- 5 pm; Thursday-Sunday: 10 am- 4 pm.
Image by Halibutt on Wikimedia under Creative Commons License.

There's lots of high quality art galleries to be found in Warsaw, and they are mostly concentrated in the center of the city. Visitors will see artwork from around the world, by artists both known and unknown, as well as local ones. Warsaw also houses many outstanding museums, which offer interesting and exciting exhibitions. Check out these wonderful museums and galleries in Warsaw in the...  view more