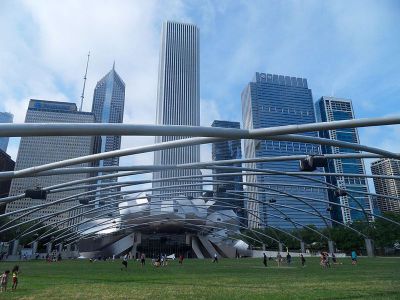 Millennium Park is a public park in the Loop community area of Chicago. Originally, it was intended to celebrate the third millennium; hence the name. Bounded by Michigan Avenue, Randolph Street, Columbus Drive, and East Monroe Drive, this is a prominent civic center near the city's Lake Michigan shoreline that covers a 24.5-acre (99,000 m2) section of northwestern Grant Park. The latter is linked to Millennium Park by the BP Pedestrian Bridge and the Nichols Bridgeway.

The park features a variety of public art and, in 2015, became the location of the city's annual Christmas tree lighting. The park is free to enter and is a home to multiple attractions such as the Jay Pritzker Pavilion, Cloud Gate, the Crown Fountain, the Lurie Garden and others. Because it sits atop a parking garage and the commuter rail Millennium Station, the park is considered the world's largest rooftop garden, and has received awards for its accessibility and green design.

In 2017, Millennium Park was the top tourist destination in Chicago and the American Midwest, and was placed among the top ten in the United States with 25 million annual visitors.

Why You Should Visit:
Enjoyable for all age groups. Great for singles, couples, groups, family.
With so many sites and attractions, you can spend days just walking and exploring.

Tip:
If you get up early in the morning, you'll have the park to yourself and be able to enjoy interacting with the exhibits more personally.
Go back later in the evening as both the exhibits and atmosphere change.