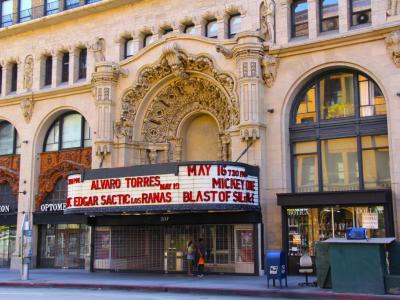 The Million Dollar Theatre on Broadway in Downtown Los Angeles is one of the first movie palaces built in the United States. It opened in 1917 with the premiere of William S. Hart's The Silent Man. It's the northernmost of the collection of historical movie palaces in the Broadway Theater District and stands directly across from the landmark Bradbury Building. The theater is listed in the National Register of Historic Places.

The Million Dollar was the first movie house built by entrepreneur Sid Grauman. Grauman was later responsible for Grauman's Egyptian Theatre and Grauman's Chinese Theatre, both on Hollywood Boulevard, and was partly responsible for the entertainment district shifting from downtown Los Angeles to Hollywood in the mid-1920s.

Sculptor Joseph Mora did the elaborate and surprising exterior Spanish Colonial Revival ornament, including bursts of lavish Churrigueresque decoration, statues, longhorn skulls, and other interesting features. But many think its interior is even better than the exterior, beautiful and classic. It is said that the theatre cost over a million dollars to build, hence its name.

Million Dollar Theatre has had an eventful life over the past century, even being the home of a church for some years. Nowadays the theatre is home to special movie screenings that feature historic theatres in the Broadway district of Downtown Los Angeles.
Image Courtesy of Wikimedia and MikeJiroch.
Sight description based on Wikipedia.