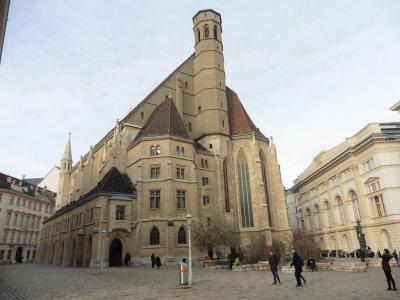 Minoritenkirche is also known as The Italian National Church of Mary of the Snows. The corner stone was laid in 1276 and dedicated to Saint Francis of Assisi. As the name suggests, the church started out as a Minorite holding of the Franciscan monks. In 1782, Joseph II gave the church to the Italians and the name was changed. The Minorite community had fled the area under religious prosecution.

This old church has been through several changes in its long life, and it is easy to see where pieces and parts have been added over the centuries as different groups have had their influence. One of the most notable features concerns the lack of a spire on the top of the tower.

The tower really doesn’t fit the Gothic nature of the building as it was one of the parts that were added later. It did have a proper top, however, that was destroyed twice during wars in the 1500s. After rebuilding the top twice, a flat roof that was more difficult to shoot off was installed.

The inside of the massive church is just as distinctive. There are several chapels, and several modifications have been made over the centuries. The high alter has a Baroque feel to it, although most of the older Baroque adornments have been removed from the church to again have the Gothic style.

There is a mosaic of Da Vinci’s The Last Supper that was commissioned by Napoleon when he invaded Vienna. The mosaic was to have been in another building, but it was simply too large to fit there. After Napoleon’s defeat, the mosaic was purchased by Franz I and placed in the vast Minoritenkirche where its beauty can still be appreciated today.
Image by Paul Robertson on Flickr under Creative Commons License.
Sight description based on wikipedia