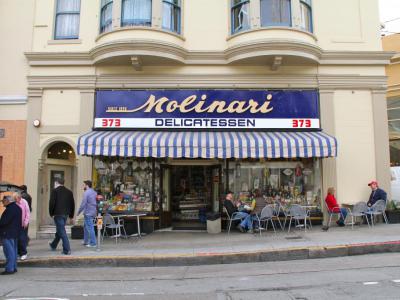 Molinari's is a delicatessen in San Francisco's North Beach District, established in 1896, making it one of the oldest delis in the United States. They make their own brand of salami, as P.G. Molinari and Sons, Inc, which is sold nationwide, and which won a gold medal award in Italy.

Molinari's was founded by P.G. Molinari, who moved to San Francisco in 1884 from the Piedmont region of Italy. In 1895, one year after getting married, Molinari went into business for himself on Broadway. However, after the 1906 earthquake, he moved his business to the current location on Columbus Avenue in North Beach District.

Molinari Delicatessen has been one of most popular delis in San Francisco. Customers are often lined up waiting to order one of the 35 loaded Italian sandwiches served on eight different kinds of bread.
Image Courtesy of Wikimedia and The Erica Chang.
Sight description based on Wikipedia.