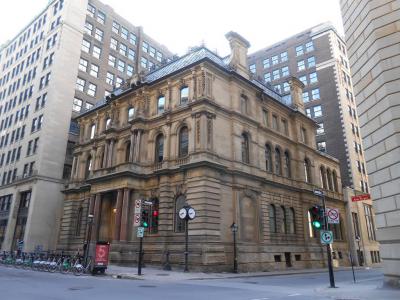 Molson Bank sits at the heart of the city's (and country's) former business center, in the western part of Rue St-Jacques, which speaks favorably of, and largely added to, its commercial prestige over the years. The bank's mansion-like appearance is in dramatic contrast with the very tall neighboring structures built in later periods; that notwithstanding, the Ohio buff sandstone facing, an innovation at the time, harmonizes well with the variety of stone used later in the area.

As part of the classical-minded composition, the ground floor's rusticated masonry, and the more delicately treated floor above, owe their architectural vocabulary to northern Italian Renaissance design, recalled by the mascaron keystones. The centre porch and all of the upper part of the building, on the other hand, derived their design from contemporaneous French architecture, as evidenced by the red granite twin columns, segmental windows, spiral-shaped window fins, the crowning sculpture, the mansard roof and the metallic cresting. Imported from London, this manner of combining Italian Renaissance and French influences made the Molson Bank building a participant, before any New York bank, in what would later be designated as the Second Empire style.

Harry Markland Molson, one of the bank's directors, was among the passengers who died in the Titanic disaster. He was last seen on board, removing his shoes with intentions to swim to a nearby ship. His body was never recovered.
Image by Jeangagnon on Wikimedia under Creative Commons License.