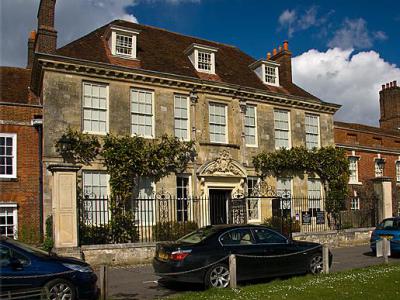 The Mompesson House is an 18th century Queen Anne style house located within the Cathedral Close at Salisbury. It is owned by the National Trust since 1975. it was built for Sir Thomas Mompesson MP, in 1679. He was a member of Parliament from 1661 to 1689 for Wilton, Salisbury, Wiltshire and the rotten borough of Old Sarum.

The house has Chilmark stone facing. Next to the house is a brick service building that replaced the old Eagle inn that was closed in 1625. Thomas' son, Charles, completed the service building in 1701, leaving his initials on the tops of the drain pipes.

The house passed sequentially to other families until 1846. In that year the Townsend family moved in. Miss Barbara Townsend, a dashing, well known artist, lived there all her life, until 1942. The house was purchased by architect Denis Martineau. Denis left the house to the National Trust in 1971.

The house is currently used to show the Turnbull collection of English glassware and the Bessemer-Wright collection of ceramics. The house was featured in the 1995 version of the film, "Sense and Sensibility."
Image Courtesy of Wikimedia and Mike Searle.