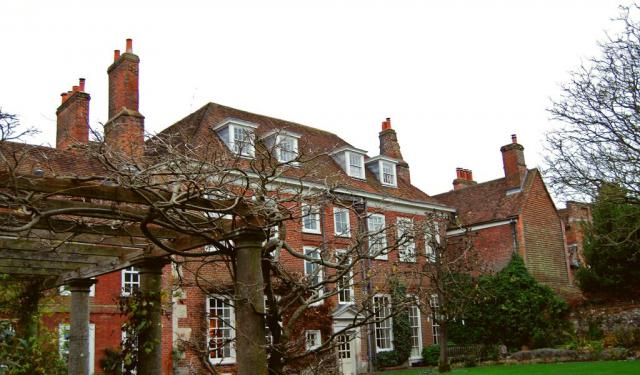 Founded more than 800 years ago, Salisbury understandably has a great number of historical, architectural and cultural gems worthy of a visit. The medieval houses, churches, inns and hospitals blend harmoniously with the modern sites of the city. Trace the threads of Salisbury's past on this self-guided walking tour of the city's historic buildings.
Image Courtesy of Flickr and Olivia Mobbs.
How it works: Download the app "GPSmyCity: Walks in 1K+ Cities" from iTunes App Store or Google Play to your mobile phone or tablet. The app turns your mobile device into a personal tour guide and its built-in GPS navigation functions guide you from one tour stop to next. The app works offline, so no data plan is needed when traveling abroad.

Trinity Hospital was established in the 1380s and is devoted to the Holy Trinity. It was built on the site of a former brothel. The hospital started as a charitable facility for poor citizens and strangers, and it also provided food and shelter for the elderly. The current building on the site was constructed in 1702 and was remodeled at the start of the 21st century. Trinity Hospital continues to serve as an almshouse.
Image Courtesy of Lambert.
2

Best Western Red Lion Hotel dates back to 1220 AD and is said to be the oldest hotel in Britain. Its creeper-clad courtyard and pleasant 18th-century facade reinforce the history and charm of the place. The hotel has a Victorian lounge, medieval-style bar, 51 rooms and 6 conference halls. Red Lion Hotel is a great place to stay the night and is a fabulous venue for celebrating special occasions as well.
Image Courtesy of Wikimedia and Chris Talbot.
3

John a’Port’s House and William Russel’s House, located in the Market Place next to Guildhall, are regarded as the oldest buildings in Salisbury. They are twinned timber-framed buildings with pointed roofs. John a’Port’s Hous was constructed in 1425 by Salisbury's mayor John a’Port. William Russel’s house was built in 1306 but appears newer because of its false facade. Both houses have remarkable interiors with dark beams, fireplaces, chiseled stairs and Elizabethan paneling. The buildings were refurbished in 1930, and they now house Watsons and a specialty china shop.
Image Courtesy of Wikimedia and Graham Horn.
4

John Halle, a merchant and mayor of Salisbury, was the first owner of this house, which was built in 1470. The building, which now serves as the Odeon Cinema, is quite out of the ordinary. Its facade and foyer were designed in the Tudor style and date back to the 15th century. Its medieval interior has a fireplace with John Halle’s coat of arms, leaded windows, tall arched ceilings and walls decorated with pikes and armor. Even though the building now is home to a modern cinema, it has maintained its medieval charm.
Image Courtesy of Wikimedia and Chris Talbot.
5

The Old George Inn on High Street was built as a "coaching" inn, in 1364. The Inn was named for its association with the Guild of Saint George. The Guild was formed in 1306 by the mayor and corporation of the city.

In 1645 Oliver Cromwell spent the night at the Inn on his way to meet his army. Samuel Pepys, diarist and "Father of the British Navy", wrote of the Inn, "very good diet, but very dear." He had a row with the landlady and moved to cheaper digs next day.

Inside the Old George is a warren of hallways, warped floors and steep, uneven stairs. A fire door from the mall opens on the Inn banqueting hall. Wooden pillars and beams frame a minstrel's gallery and a Jacobean mantelpiece.

Overhead are the carved heads of King Edward II and Queen Isabella. Isabella is said to have murdered the king. But here they are, together again. Charles Dickens refers to the Inn in "Martin Chuzzelwit." William Shakespeare and company rehearsed "As You Like It" on the mall. The 14th century inn contrasts sharply with the style of the mall.

The Mall is home to many high-profile shops and stores, including: Marks & Spencer, WH Smith, and H&M. There is an onsite shoppers' car park on New Street with access to the Mall. There are cafes within the Mall including: Pret a Manger, Costa Coffee and Cafe Rouge. After the Cathedral Close, take a walk to the Mall for a coffee/shopping break.

The Bishop's Mill is no longer a mill. It is a pub in an historic building located on an island in the River Avon in the center of Salisbury. The facade is dressed with flint and stone. It has two gables with stone mullioned tall windows. It has three stories of red brick and wooden casements. The roof has old tiles.

The earliest lease for the property is dated 1504. The lease describes the property as "four water mills" called the Bishops Mills. The pub was in fact owned by the bishop of Old Sarum and it is mentioned in William the Conqueror's Doomsday Book.

The Bishops Mill pub has a covered beer garden with tables and chairs set on a lawn alongside the serene avon River. A wooden bridge reaches across the river to the mill. The inside is a a high-ceiling main space. The walls are of flint and brick and there is a mezzanine type second floor gallery. The mill is a favorite watering hole for both tourists and locals.
Image Courtesy of Chris Talbot.
7

This scenic stone house was built by merchant W. Lightfoot in the 15th century. Since 1628 the house served as Salisbury’s workhouse. Later several houses on Crane Street, Nos. 95, 97 and 99, were used as the diocesan Church House. Because of their importance as the city’s Diocesan Office, these houses on Crane Street were completely renovated in 1887 by Weymouth architect George Crickmay.
Image Courtesy of Wikimedia and Chris Talbot.
8

The Mompesson House is an 18th century Queen Anne style house located within the Cathedral Close at Salisbury. It is owned by the National Trust since 1975. it was built for Sir Thomas Mompesson MP, in 1679. He was a member of Parliament from 1661 to 1689 for Wilton, Salisbury, Wiltshire and the rotten borough of Old Sarum.

The house has Chilmark stone facing. Next to the house is a brick service building that replaced the old Eagle inn that was closed in 1625. Thomas' son, Charles, completed the service building in 1701, leaving his initials on the tops of the drain pipes.

The house passed sequentially to other families until 1846. In that year the Townsend family moved in. Miss Barbara Townsend, a dashing, well known artist, lived there all her life, until 1942. The house was purchased by architect Denis Martineau. Denis left the house to the National Trust in 1971.

The house is currently used to show the Turnbull collection of English glassware and the Bessemer-Wright collection of ceramics. The house was featured in the 1995 version of the film, "Sense and Sensibility."
Image Courtesy of Wikimedia and Mike Searle.
9

Concealed from the road by a modern college block, the Old Deanery building, situated opposite the west end of the Cathedral, was probably one of the first sites to be developed within the Close, circa 1220. In 1277, Bishop Roger de Wykehampton made over the Hall, that he had occupied as Dean, to be used as the Deanery. Ever since then and for another 700+ years, until 1922, it had served as the primary accommodations for Deans, following which it became part if the diocesan training college of Sarum St Michael.

Back in the 13th century, the property comprised an open hall with service rooms, a cross range and a chapel. It was enlarged during the late 14th or early 15th century, and further restored in 1670. Another, partial reconstruction took place in the second half of the 18th century, with further alterations followed in the early 19th century. The building was once again restored throughout 1960-63, and in 1981 was turned into a block of flats.

Today, the Deanery complex encompasses three medieval houses along the River Avon, which are in perfect condition courtesy of extensive restorations, the most recent one being in 1995. Inside the Medieval Banqueting Hall, underneath a timber-framed roof supported by stone walls, you will find the High Table, the old hearth and original 13th-century wall painting. Also in the Hall, from April to September, a 30-minute video on Salisbury’s history, called 'Secrets of Salisbury,' is demonstrated every hour.
Image Courtesy of Wikimedia and Graham Horn.