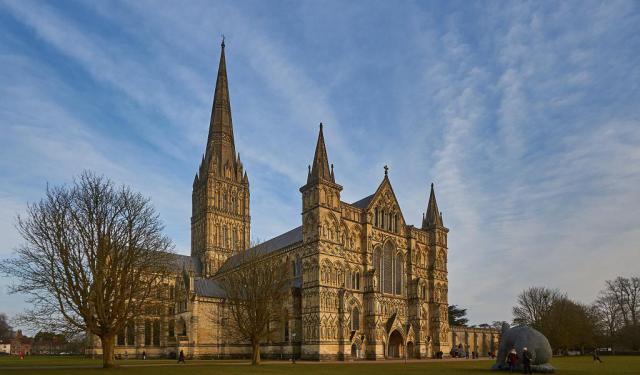 Salisbury is one of the UK’s oldest and most historic and cities. It is also a city surrounded by beautiful scenery and is often called the City in the Countryside. As there is so much to see in Salisbury, it makes an excellent choice for exploring on foot whilst you soak up its history. On this self guided walk, you will visit Salisbury Cathedral (which is home to the famous Magna Carta), see the timbered buildings and shop at Old George Mall, and explore its many historic buildings in the ancient city center.
Image Courtesy of Flickr and Pedro Szekely.
How it works: Download the app "GPSmyCity: Walks in 1K+ Cities" from iTunes App Store or Google Play to your mobile phone or tablet. The app turns your mobile device into a personal tour guide and its built-in GPS navigation functions guide you from one tour stop to next. The app works offline, so no data plan is needed when traveling abroad.

Located in the heart of the city, the Guildhall is the most significant landmark on Market Place. Salisbury's market began in the 13th century and grew quickly, becoming the city’s cultural, trade and business center. The present Guildhall building was constructed in the late 1700s and was renovated several times over the years. The most recent renovation took place in 1991. Today it’s a single-story brick structure with six tall columns. It served as the courthouse and government building until 1927. Now the Guildhall hosts weddings, as well as business and cultural events. A World War memorial stands at the entrance.
Image Courtesy of Wikimedia and Olaf Meister.
2

St. Ann Gate is the east entrance to the Close. The Wall and the Gate were built in the 14th century. Before 1330 a channel of water from the River Avon divided the Close from the town. For the construction of the wall surrounding the Cathedral, blocks were taken from Old Sarum Cathedral. St. Ann Gate is stone gatehouse, and it formerly served as a canonry. It is famous for the fact that the composer Handel gave his first public concert in Salisbury in the house above the Gate.
Image Courtesy of Wikimedia and Roger Templeman.
3

Salisbury Cathedral, formally known as the Cathedral Church of the Blessed Virgin Mary, is an Anglican cathedral in Salisbury and is considered one of the leading examples of Early English architecture. The cathedral has the tallest church spire in the United Kingdom (123m/404 ft). Visitors can take the "Tower Tour" where the interior of the hollow spire, with its ancient wood scaffolding, can be viewed. The cathedral also has the largest cloister and the largest cathedral close in Britain. The Cathedral contains the world's oldest working clock (from AD 1386) and has the best surviving of the four original copies of Magna Carta. Although commonly known as Salisbury Cathedral, the official name is the Cathedral of Saint Mary. In 2008, the cathedral celebrated the 750th anniversary of its consecration in 1258.

As a response to deteriorating relations between the clergy and the military at Old Sarum, the cathedral was moved to its present place in Salisbury. Legend has it that the Bishop of Old Sarum shot an arrow in the direction he would build the cathedral; the arrow hit a deer and the deer finally died in the place where Salisbury Cathedral is now. The foundation stone was laid on 28 April 1220.Due to the high water table in the new location, the cathedral was built on only four feet of foundations, and by 1258 the nave, transepts and choir were complete. The west front was ready by 1265. The cloisters and chapter house were completed around 1280. Because the cathedral was built in 38 years, Salisbury Cathedral has a single consistent architectural style, Early English Gothic.

Image Courtesy of Wikimedia and Antony McCallum.
Sight description based on Wikipedia.
4

Arundells is a Grade II* listed house. It was the home of Edward Heath, the former Prime Minister of the United Kingdom, from 1985 until his death in 2005.

The house and its extensive garden are open to the public five days a week from late March to late October each year.

Arundells has its origins as a Medieval canonry in the thirteenth century; its first recorded occupant was Henry of Blunston, Archdeacon of Dorset, who was resident from 1291 to 1316. Many other canons lived there up to Leonard Bilson, who was imprisoned in 1571 for practising sorcery and magic. The house was then leased by the Cathedral Chapter to a series of lay tenants, including Sir Richard Mompesson (from 1609) and John Wyndham (1718); the former rebuilt a large part of the property in the classic style of the day. Wyndham gave the house to his daughter, who married the third son, James Everard Arundel, of the sixth Lord Arundel of Wardour in 1752, resulting in the house acquiring its current name.

Following Heath's death in July 2005, his estate was bequeathed to the Sir Edward Heath Charitable Foundation, established under his will, with the express purpose of ensuring that the house and its contents could be opened to the public as a place of historic interest.

The house contains a varied and unique collection of artefacts reflecting Heath's time in public life, his passion for art, and his notable achievements in music and sailing.


Image Courtesy of Wikimedia and Mike Searle.
Sight description based on Wikipedia.
5

The Rifles (Berkshire & Wiltshire) Museum opened in 1981. The museum occupies a building that was constructed in 1254. The primary shape of the main hall and two service annexes still remains, but the current layout was established during a reconstruction in the 19th century. The Rifles (Berkshire & Wiltshire) Museum is also known as The Wardrobe, because it was used as a depot and administrative base by clergymen. The museum collection showcases the heritage of the County Regiments of Berkshire and Wiltshire. You can explore the regimental library and archive by appointment. After checking out the museum's extensive collection, you can wander along the beautiful riverside gardens.
Image Courtesy of Wikimedia and Andrew Dunn.
6

Mompesson House is an elegant Queen Anne-style house, which was built in 1701 for the Mompessons, a prominent merchant family. Today it is under the protection of the National Trust. Its spacious interior features a carved timber staircase, original paneling and fine plasterwork. The apartments are furnished in period style. Mompesson House displays Captain Turnbull's collection of 18th-century drinking glasses. There is a charming walled garden adjacent to the house.
Image Courtesy of Wikimedia and Mike Searle.
7

High Street Gate was built in the mid-13th century and is the main entrance into the Close. It‘s one of four gates around the Cathedral. The Gate has a portcullis that is still locked in the evening and reopened in the morning. There is a solitary sculpture of a knight on the inner side of the wall and a Royal Coat of Arms on the outer side. The Porter's Lodge building is at High Street Gate. The porter’s post was once very prestigious among courtiers.
Image Courtesy of Wikimedia and Vammpi.
8

Old George Inn, built in 1361, was one of city’s oldest inns. Only part of the original Old George remains, but it now has Grade 1 Listed Building in England status. Inside is a wonderful banqueting hall with wooden panels, bunched pillars, oak timbers and a large stone fireplace. Roughly carved heads of Edward II and Queen Isabella are above the pillars. The inn has kept its steep 18th-century staircase, rough floors, Tudor plasterwork decorations and remarkable bay window.

One of the most interesting aspects of the Old George Inn is its impressive guest list. The diarist Samuel Pepys stayed here for one night and when he saw the bill, he became infuriated and had a row with the landlady and moved to a cheaper inn the next morning. In 1645 Oliver Cromwell spent a night at Old George on his way to joining the army. The inn also appeared in Charles's Dickens's novel "Martin Chuzzlewit".

Some 37 years before Oliver Cromwell came, William Shakespeare and his strolling players stayed at the inn en route to Wilton, it is said they rehearsed “As You Like It” in the garden of the inn where Old George Mall now stands.

***The Old George Mall shopping centre is home to some of the biggest retail chains, including M&S, Accessorize, H&M, The Body Shop, Superdrug, WHSmith and Lakeland, as well as independent options. Phone shops, shoes, health and beauty and stationary stores are also available.

If you are in need of a pit-stop there are coffee shops and restaurants found here, including Costa, Boston Tea Party, Greggs and Byron Burgers.

The shopping centre is is partially covered to keep shoppers dry, and there is a private, paid multi-storey car park with lifts and public toilets. ***PH***
Image Courtesy of Wikimedia and Graham Horn.
9

The Bishop’s Mill, also called the Mill, sits on the riverside next to Bridge Street in the Maltings shopping area. The mill was once owned by the Bishop of Old Sarum and was built in the 17th century. Bishop Richard Poore, one of the city's founders, helped restore the building in the 18th century. It is a two gabled building made of pebble and flint stone. Today it houses a modern style bar and a restaurant. Its riverside setting provides a spectacular view.
Image Courtesy of Chris Talbot.
10

Poultry Cross is a historic structure that was originally built in 1335. It is located in the center of the city's historic market place, near Silver Street. It is named Poultry Cross, because it once housed stalls where vendors would sell birds and fowl. The present structure dates back to the 15th century, with some additions from 1852. In the area surrounding Poultry Cross, trade stands still operate on Tuesdays and Saturdays.
Image Courtesy of Wikimedia and Balou46.
11

Butcher Row is a paved pedestrian area lined with individually-owned shops. Hawkins Bazaar is toy shop where you can find a number of funny items and gifts. Fat Face sells casual clothes for men and women, while tReds offers affordable fashion footwear from famous brands. There is mobile phone shop, named Phones 4U, which provides the latest models from the UK's leading mobile networks. A real gem in this area is the jewelry store Goldsmiths, which is housed in a Tudor timber-framed building. Goldsmiths is one of the leading retailers of quality watches, timepieces, jewelry, crystal items and gifts. And if you're in need of a break, visit Costa Coffee, Stobys or Reeve The Baker for a coffee and snack.
Image Courtesy of Peter Facey.

Salisbury Cathedral is renowned throughout the world. The Cathedral Close is a marvelous setting for the 13th-century Church of the Blessed Virgin Mary, otherwise known as Salisbury Cathedral. Take this self-guided tour to stroll around Salisbury's most famous landmarks and appreciate the stunning architecture and craftsmanship of the Cathedral and Close.