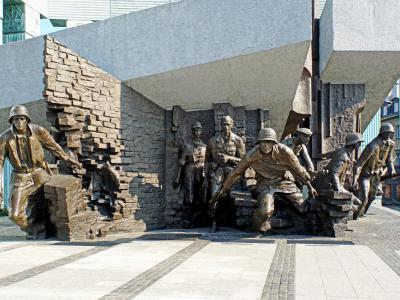 The Warsaw Uprising was a pivotal moment in World War II for Poland. From August until October in 1944, the underground Polish resistance movement and the Home Army fought to retake Warsaw from the Germans. The uprising was timed to coincide with the German retreat from Poland as the Soviets advanced.

Being against the communist party, the resistance was not supported by the Soviet troops who stopped short of the town. Their pause allowed the Germans to regroup and defeat the uprising. In retaliation, the German troops destroyed virtually every building in Warsaw, spending the remainder of 1944 pillaging and looting the city before leaving it abandoned. The Soviets, who held their position outside of town and prevented Allied support from reaching Warsaw, only retook the town only after the Germans had left.

For many years after the war, the significance of the uprising was downplayed. Communist propaganda condemned the Home Army and their insurgent actions.

The monument to the tragic events was unveiled in 1989 on the 45th anniversary of the uprising. Wincenty Kucma and architect Jacek Budyn sculpted it. The monument is located just outside the Palace of Justice, the seat of the Polish Supreme Court.

If you'd like to learn a little more about the 1944 Uprising, don't miss the Warsaw Rising Museum. The museum's exhibits depict the fighting and everyday life during the uprising and cover the political issues and post-war Communist regime.
Image by Dennis Jarvis on Flickr under Creative Commons License.