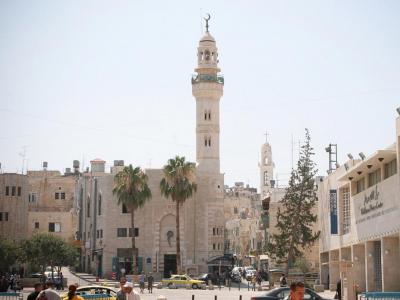 Bethlehem’s skyline is a palimpsest inscribed with symbols of the long-lasting coexistence of Christian and Muslim faiths. One such symbol is the Mosque of Omar, the only mosque in Bethlehem’s Old City, sided with numerous minarets and bell towers soaring high above the horizon standing next to each other.

Located in Manger Square, right across from the Nativity Church, the Mosque of Omar was built in 1860 on a land donated by the Greek Orthodox Church in honor of the second Caliph Rashidi Omar Bin Al Khattab, father-in-law of Prophet Muhammad, who took Bethlehem in 637 A.D. from the flagging Byzantines and then stopped for a prayer at the Christian Church of the Nativity. After that, the Caliph vowed to protect the sanctity of Christian churches and monuments, as well as the clergy.

The Omar Mosque underwent substantial renovation in 1955, under the Jordanian Mandate over parts of Palestine (the West Bank), and then again in 2004, after suffering damages during the Second Palestinian Intifada. During Ramadan nights, the square in front of the mosque gets busy with worshipers gathering for collective evening prayers, Taraweeh, marking the Iftar, breaking of the fast.
Image by kellinahandbasket on Wikimedia under Creative Commons License.