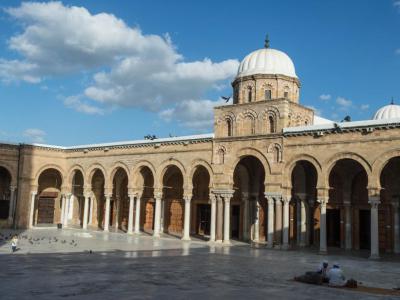 Mosquée Zitouna is the oldest mosque in Tunis. The large mosque consists of 1.2 acres (approximately 5,000 square meters). It has nine entrances and more than 150 columns that were sourced from the ruins of Carthage. The design of the building follows that of the Mosque of Uqba in the town of Kairouan, Tunisia.

Mosquée Zitouna is a mosque that goes by many names. It is sometimes called I-Zaytuna Mosque, Ez-Zitouna Mosque or El-Zituna Mosque. The literal English translation of the mosque is "Mosque of Olives." The name comes from the tomb of Santa Olivia that was at the location which, prior to its conversion into a mosque, was a Christian basilica.

It is thought that the mosque was built in 703 BCE. It was home to one of the first Muslim universities, the University of Ez-Zitouna. In its early days the university taught history, grammar, science, medicine, philosophy, law and the Quran.

Tip:
As a non-Muslim, you may take a look at the square of the mosque (via the main gate) and snap some photos, but will not be allowed entering to the prayer room.
Image Courtesy of Wikimedia and Ryadh Gharbi.