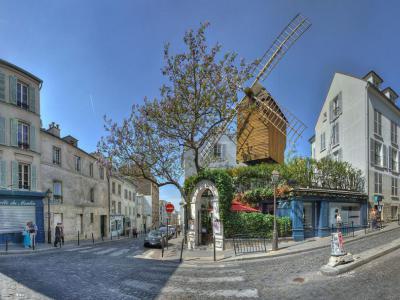 The place had a tragic history in its past. The Debray family acquired the mill in 1809 for producing flour. At the end of the Napoleonic Wars in 1814, during the siege of Paris three Debray men lost their lives defending the windmill against Cossacks. The killed men were nailed to the wings of the windmill.

In 1833, the Debray family converted the place into a bar and restaurant. The idea proved successful and Moulin de la Galette soon drew many Parisians who enjoyed the freshly baked galettes with a glass of wine, and the panoramic views of Paris and the river Seine from the top of the hill.

The Moulin de la Galette was declared a monument in 1958. Today the windmill marks the entrance of the bar and restaurant that offers an extensive menu. In good weather, it is still an excellent place to sip the locally made wine and enjoy the music in its garden, just like what Parisians used to do in Renoir's famous painting.
Image Courtesy of Giorgio Galeotti.