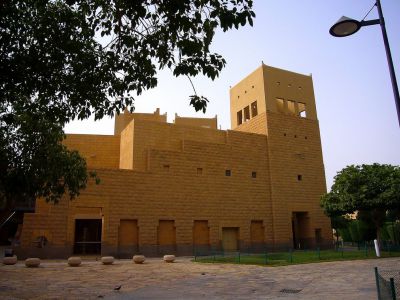 The Murabba Palace was built in 1938 by order of King Abdul Aziz, the founder of Saudi Arabia. The purpose was to accommodate his growing family as well as to serve as a government facility where he would meet with world statesmen and host official functions. Many vital events in the history of Saudi Arabia happened here. Among them is signing of the agreement that opened the country for oil exploration. In 1953 the use of the palace discontinued, and later it was decided to renovate the old palace and its compound buildings and create a cultural and historic center. The Murabba Palace contains a vast collection of memorabilia, photos and historical recordings regarding the founding of the Kingdom, as well as personal belongings of King Abdul Aziz, including his car collection and the original Rolls Royce that the King received as a gift from Winston Churchill.
Image by Lluís Sala on Flickr under Creative Commons License.

Want to visit this sight? Check out these Self-Guided Walking Tours in Riyadh. Alternatively, you can download the mobile app "GPSmyCity: Walks in 1K+ Cities" from iTunes App Store or Google Play. The app turns your mobile device to a personal tour guide and it works offline, so no data plan is needed when traveling abroad.

Create Your Own Walk in Riyadh

Creating your own self-guided walk in Riyadh is easy and fun. Choose the city attractions that you want to see and a walk route map will be created just for you. You can even set your hotel as the start point of the walk.

Riyadh is the capital city of the Kingdom of Saudi Arabia. Once a small walled city, today it is a vibrant metropolis and one of the fastest developing cities in the world. In the last 100 years the city population has grown from 18,000 to over 5 million people. Riyadh has developed culturally, but especially economically beginning with the 1950s when the petroleum industry boomed. This...  view more