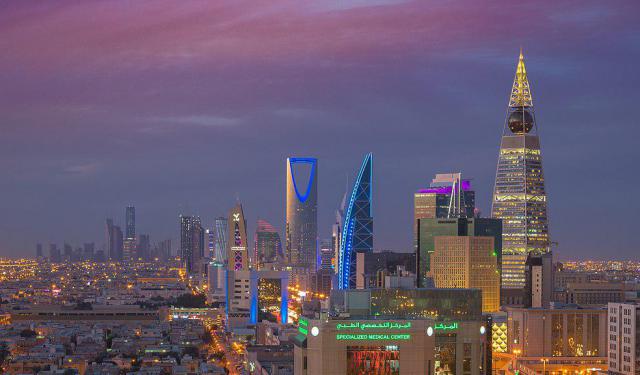 Image by B.alotaby on Wikimedia under Creative Commons License.

Riyadh is the capital city of the Kingdom of Saudi Arabia. Once a small walled city, today it is a vibrant metropolis and one of the fastest developing cities in the world. In the last 100 years the city population has grown from 18,000 to over 5 million people. Riyadh has developed culturally, but especially economically beginning with the 1950s when the petroleum industry boomed. This Orientation Tour will familiarize visitors with some of city’s most popular and traditional Arabic style attractions.
How it works: Download the app "GPSmyCity: Walks in 1K+ Cities" from iTunes App Store or Google Play to your mobile phone or tablet. The app turns your mobile device into a personal tour guide and its built-in GPS navigation functions guide you from one tour stop to next. The app works offline, so no data plan is needed when traveling abroad.

One of the identifying features and key landmarks of the city, Riyadh Water Tower on Wazir Street was constructed in 1971 with a filling capacity of 12,000 cubic meters. It has a simplistic, yet curious design, resembling a mushroom. The Water Tower is open to visitors and offers a great view of the city from its top deck. There is also a restaurant at the top of the Tower.
Image by BroadArrow on Wikimedia under Creative Commons License.
2

Al-Madi Mosque is located on the King Faisal Road, near the National Museum of Saudi Arabia and is often called “Museum Mosque”. Its square building is crowned with a small tower. The mosque premises is built in Islamic architectural style which is represented by pure plain lines and modest facade with patterned ornament on the upper side of the wall.
Image by Juanedc on Flickr under Creative Commons License.
3

The National Museum of Saudi Arabia was established in Riyadh in 1999 as part of King Abdul-Aziz Historical Center. The Museum is a cultural and civilization center, with a focus on the history of the Arabian Peninsula and the message of spreading the Islamic faith. The sand dunes outside Riyadh inspired architect Raymond Moriyama to design the Museum’s forms and colors. The west façade represents a pointy crescent oriented toward the holy city Mecca. The Museum consists of eight galleries, arranged chronologically: Man and the Universe, Arabian Kingdoms, The Pre-Islamic Era, Prophet Mohammad’s Mission, Islam and the Arabian Peninsula, First and Second Saudi States, The Unification, and The Hajj and the Two Holy Mosques (this last one displays a large model of Mecca and its surroundings). It is an institution that’s very rich in facilities and exhibitions that create a modern educational environment, which any visitor will appreciate.
Image by Lluís Sala on Flickr under Creative Commons License.
Sight description based on wikipedia
4

The Murabba Palace was built in 1938 by order of King Abdul Aziz, the founder of Saudi Arabia. The purpose was to accommodate his growing family as well as to serve as a government facility where he would meet with world statesmen and host official functions. Many vital events in the history of Saudi Arabia happened here. Among them is signing of the agreement that opened the country for oil exploration. In 1953 the use of the palace discontinued, and later it was decided to renovate the old palace and its compound buildings and create a cultural and historic center. The Murabba Palace contains a vast collection of memorabilia, photos and historical recordings regarding the founding of the Kingdom, as well as personal belongings of King Abdul Aziz, including his car collection and the original Rolls Royce that the King received as a gift from Winston Churchill.
Image by Lluís Sala on Flickr under Creative Commons License.
5

King Abdul Aziz Dara is a place where you can find all information about Kingdom, Islam and the world of the Arabs. The materials availaible in many different languages. You will find maps, illustrations and documents for any pertaining reference here. The National Library Museum and Military Museum are also a part of the historical complex.King Fahd National Library Museum has one of the greatest coin collections. It does have unique historical books and manuscripts. King Abdul Aziz Military Museum keeps the remnants of Riyadh. Tourists visiting Museum in Riyadh will be able to see its unique collections.
6

This is probably the most iconic building in Riyadh. ‘Masmak’ means strong and well fortified, and this is the perfect descriptive of this great structure. It is a fort made of clay and mud brick with a foundation of stone blocks, featuring thick walls, four watchtowers, labyrinthine rooms, an enclosed mosque and a well. The fort was built around 1865 and has been a witness to many important historical events, including the recapturing of Riyadh in 1902. It is located in the old area of downtown Riyadh, and is one of the restored buildings of the King Abdul Aziz Historical Center. The Masmak Fort museum has a vast collection of old guns, clothing and objects of agricultural use.
Image by Baptiste Marcel on Wikimedia under Creative Commons License.
Sight description based on wikipedia
7

Located close to the Masmak Fort, Deera Square is a public area adjoining the headquarters of ‘mutawwa’, Saudi Arabia’s religious police. It is also known as the Justice Square or Chop-Chop Square, because this is where public executions by beheading and stoning take place. It is said that such events are actually rare, because often times the family of the victim pardons the criminal for financial recompense.
Image by BroadArrow on Wikimedia under Creative Commons License.
Sight description based on wikipedia
8

This is an old mosque that has been recently restored on the same site where it stood for many years. It is one of the largest mosques of the Saudi Kingdom. It has a seating capacity for up to 17,000 people and two libraries. The structure is made of exquisite brown stone, and when it’s lit up at night it appears to be golden. A truly impressive sight to see. The mosque is connected to the Judgment Palace by two bridges.
Image by desrunyan on Flickr under Creative Commons License.
9

This majestic mosque was constructed in honor of Sheikh Mohammed Bin Ibrahim, who was one of the most influential Muslim scholars of the 20th century and the highest religious authority in Saudi Arabia during the 1950s and 1960s. Two of his sons have served as Ministers of Justice of the Saudi Kingdom.
Image by Bob the Binman on Flickr under Creative Commons License.
10

Saudi Arabia’s High Court or Shari’ah Court building is a fourteen-story structure with one underground level. It includes the Chamber of the Head of the Court and the General Secretary office, many different administrative offices, a multi-purpose room, a library, a mosque, and other services.
Image by OceanCreep on Flickr under Creative Commons License.
11

Located in the heart of Riyadh, the Salam Park represents a harmonious composition of several different environments. The park has coverage of over one thousand palm trees. There is a lake developed on an surface of 33,000 m2 with different depth levels, which is divided into two areas – one serving for boating, and the other representing natural life. A pedestrian pathway that is 33 feet wide surrounds the lake, allowing visitors access to all the areas of the park. The South Eastern corner of the park resembles a natural environment with elevation and highlands for selected species of local animals and birds, and entrance here is admitted with appointed specialists that guide visitors and introduce them to the components of this zone. Salam Park is provided with prayer buildings, snacks kiosks, safe jogging trails, a parking lot, and excellent entertainment facilities for water games and sand games, fountains, and walking pathways.
Image by Abdullah Ogaili on Flickr under Creative Commons License.