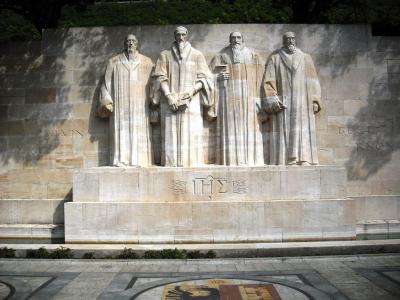 The International Monument to the Reformation, usually known as the Reformation Wall, pays tribute to the key figures of the reformist movement, and is regarded somewhat as a religious site since it depicts important periods in the evolution of the movement, as well as different notable personalities who had contributed to it.

At the center of the monument there are four 5-meter statues of Calvinism's main proponents: Jean Calvin himself (1509–1564), Guillaume Farel Théodore de Bèze, and John Knox. Calvinism is a major branch of Protestantism that follows the theological tradition and forms of Christian practice set down by John Calvin and other Reformation-era theologians. Calvinists broke away from the Roman Catholic Church in the 16th century.

The Wall sits on the grounds of the University of Geneva founded by Jean Calvin, and was erected in 1909 to commemorate 400th anniversary of Calvin and the 350th anniversary of the university. It is built into the old city walls designed to solidify the role of Geneva in the Reformation process.

During that period, Geneva was the center of Calvinism, and its history and heritage has been closely linked to Protestantism ever since. Due to the close connections to that theology, the individuals most prominently depicted on the Wall are Calvinists; however, key reformation figures in other countries are also featured here.

To the left of the central statues, facing the Wall, there are 3-meter statues of Frederick William of Prussia, William the Silent of Neitherlands, and Gaspard de Coligny of France; to the right, there are similar statues of Roger Williams of America, Oliver Cromwell of England, and Stephen Bocskai of Hungary.
Image Courtesy of Wikimedia and Ruth Nguyen.