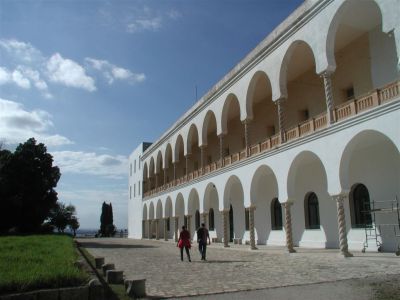 The Carthage National Museum is one of the two main archaeological museums in the region (the other being the Bardo National Museum), and is located atop Byrsa Hill. It was founded in 1875 by Cardinal Charles Martial Lavigerie, on the premises of a monastery, and was known initially as the Museum Lavigerie.

The museum received its present name in 1956. Opened as a national museum for the first time in 1963, it is the product of excavations conducted by European archaeologists, particularly those made by Alfred Louis Delattre.

In 1975, excavations exposed a Late Roman house with fragments of Roman mosaics and, further off the property, there was a large church dating to the 5th century AD. Building plans to create a site museum went into effect in 1983, with the actual opening taking place a year later.

Among other things, the Carthage National Museum, located near the Cathedral of Saint-Louis, allows visitors to appreciate the magnitude of Carthage during the Punic and Roman eras. Some of its best pieces, found during the excavations, include limestone/marble carvings, depicting animals, plants and even human sculptures. Of special note is a marble sarcophagus of a priest and priestess from the 3rd century BC, discovered in the necropolis of Carthage. The museum also has a noted collection of masks and jewelry in cast glass, Roman mosaics including the famous "Lady of Carthage", and a vast collection of Roman amphorae. The exhibits also include numerous items from the Byzantine period, as well as ivory objects.

The National Museum underwent extensive restructuring during the 1990s, and has now been redesigned to accommodate new discoveries on the site of Carthage, especially those from the searches conducted under the UNESCO auspices, from 1972 to 1995.

Tip:
A ticket bought here allows access to all historic sites in the Carthage area, such as the Roman Theater, the baths, villas, etc.
Consider hiring a guide to bring you around and explain the history of Tunisia and the story behind the ancient ruins.
Early or late evening is the best time to visit, as there are fewer tour buses then.