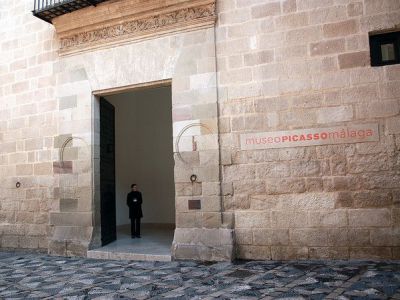 Pablo Picasso's father, Jose Ruiz, was the curator of the city museum of Malaga. The museum was not often open to the public because of limited budgets. Part of Jose's compensation was the exclusive use of a room in the building as an art studio. Pablo did his first sketches in that room, working with his father.

The Buenavista Palace that housed the museum was built in the 16th century. It was built for one Diego de Cazalla. Under the Palace were the remains of a Nasrid palace which have partially survived.

The 20th century conversion of the dilapidated palace into a museum was a challenging project led by architect Richard Gluckman. The palace alone was not large enough to accommodate all the functions of a proper museum. It was necessary to acquire two neighboring houses that had fallen into disrepair.

Christine Picasso, widow of the artist's eldest son Paulo Ruiz-Picasso, and her son Bernard have donated 155 of Picasso's works to the Museum. The collection includes early studies in Cubism and his later re-doing of Old Masters. Additional pieces are on loan. There are documents, photos and a library with nearly a thousand titles devoted to Picasso.

Tip:
It is possible to get in for free on a Sunday at noon but be aware the queues can be huge and the wait is long.