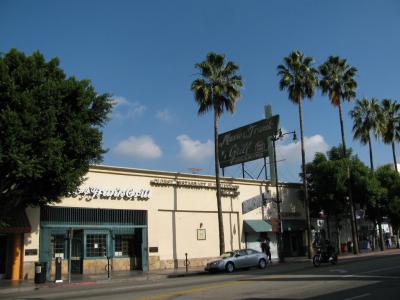 If you want to have a good meal in a restaurant that seems to transport you back to the early 20th century, then the Musso and Frank Grill on Hollywood Boulevard is the place for you.

The restaurant was opened in 1919 and although it has been renovated several times over its 100+ years, it has managed to retain the original look and atmosphere. You will find here the same oak beamed ceilings, red-leather booths, mahogany bar – and the same wonderful dry Martinis!

Back in the day, it was a favorite haunt of great writers who had been hooked into screenwriting by various unscrupulous movie moguls who used flattery to get them to work for low pay in cramped quarters on their studio back lots. F. Scott Fitzgerald used to drown his sorrows here; Raymond Chandler, William Faulkner and Ernest Hemingway all met here to grouse about how their great works were being mangled by insensitive directors and to plot their revenge on them. Thus, Faulkner once told his studio head that he wanted to work from home. The boss agreed but after several fruitless calls to his Hollywood apartment, someone remembered that the writer in fact lived in Mississippi!

Charlie Chaplin and his great friend Douglas Fairbanks used to dine here regularly. Once they held a horse race on Hollywood Boulevard with Rudolph Valentino; the loser had to pick up the restaurant bill.

Today you can enjoy good home cooking and some rather “daring” Continental dishes here, such as Bouillabaisse. The menu is extensive and includes fish, sea-food, chicken pot pie, steaks, roasts, pasta and braised ribs. If you want a snack, there is a good choice of hot and cold sandwiches, omelettes, salads and soups.
Image by Pablo Sanchez Martin on Flickr under Creative Commons License.