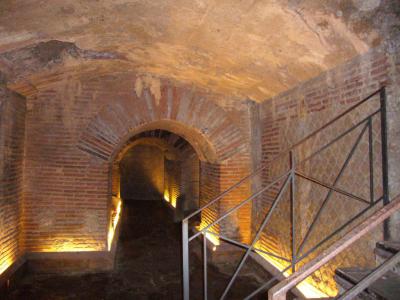 An ancient subterranean network lies beneath the city of Naples. Tunnels and caves have been carved from the volcanic rock over the last two and a half thousand years. The Greeks built the 280 mile long network in the fourth century BC to form Neapolis or New City.

The Romans then used the underground area to build aqueducts for water.

One of the most impressive sights is the Greco-Roman theatre of Neapolis. Roman Emperor Nero had a private dressing room here.

During WWII, the underground was used as an air-raid shelter. Visitors can still see weapons and tanks left over from WWII.

The first Hypogeum Gardens are located in the underground. This experimental garden attempts to grow plants away from light and pollution.

Some tunnels are narrow and require a candle or flashlight. If you feel claustrophobic, skip these tunnels.
Image Courtesy of Wikimedia and Armando Mancini.