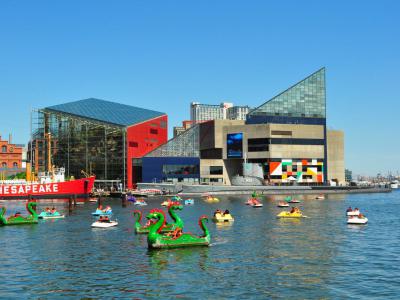 The National Aquarium, Baltimore is a non-profit public aquarium located at 501 E Pratt Street in the Inner Harbor area of Baltimore. Constructed during a period of urban renewal in Baltimore, the aquarium opened on August 8, 1981.

The National Aquarium houses several exhibits including the Upland Tropical Rain Forest, a multiple-story Atlantic Coral Reef, a Open Ocean shark tank, and Australia: Wild Extremes, which won the "Best Exhibit" award from the Association of Zoos and Aquariums in 2008. It also has a 4D Immersion Theater and opened a marine mammal pavilion in 1990.

Coastal Living magazine named the National Aquarium the #1 aquarium in the United States in 2011. In November 2006, the National Aquarium won a Best of Baltimore award from City Paper as the "Best Over Priced Destination for Families."
Image by Hu Totya on Wikimedia under Creative Commons License.
Sight description based on wikipedia