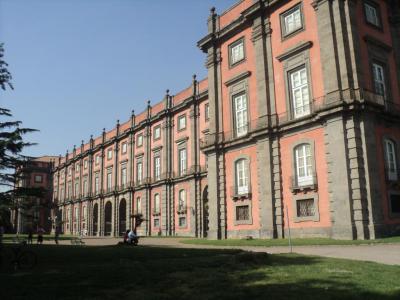 This museum, located on top of the Capodimonte Hill in Naples, has valuable pieces of classical art and sculpture and a separate section devoted to contemporary art. It is housed in an 18th century Bourbon Palace, the Palazzo Reale di Capodimonte.

The Palazzo Reale di Capodimonte was constructed by the Bourbon King, Charles VII of Naples and Sicily. It was completed in 1738 and the grand palace overlooked both the city and the bay of Naples. It served as the king’s residence and repository of the fabulous Farnese collection of art and sculpture that he inherited from his mother, Elisabetta Farnese, who was the last in the line of the Dukes and Duchesses of Parma. Successive Bourbon rulers and those from the house of Savoy also added to the collections. The present museum was opened for public viewing in 1957.

The National Museum of Capodimonte covers three floors of the palace. The first and second floors have major works from the 13th to the 18th centuries. Some of the finest works of the Neapolitan School and contemporary works are found here. The ground floor has the Farnese collection of Roman sculpture on display. Visitors can also view the Royal apartments at the palace, including some exquisite pieces of 18th century antique furniture and porcelain, as well as majolica glazed pottery brought here from other royal residences.