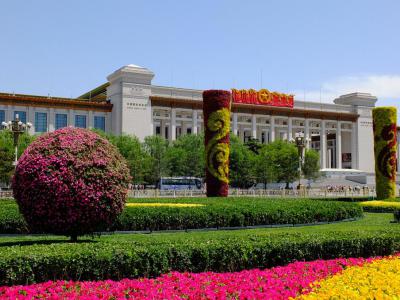 The National Museum of China flanks the eastern side of Tiananmen Square in Beijing. Its mission is to educate about the arts and history of China. It is directed by the Ministry of Culture of the People's Republic of China.

The museum was established in 2003 by the merging of the two separate museums that had occupied the same building since 1959: the Museum of the Chinese Revolution in the northern wing and the National Museum of Chinese History in the southern wing.

The museum, covering Chinese history from the Yuanmou Man of 1.7 million years ago to the end of the Qing Dynasty (the last imperial dynasty), has a permanent collection of 1,050,000 items, with many precious and rare artifacts not to be found in museums anywhere else in China or the rest of the world.

Among the most important items in the National Museum of China are the "Simuwu Ding" from the Shang Dynasty (1600 BC - 1064 BC) - at 833 kg it is the heaviest piece of ancient bronzeware in the world, the square-shaped Shang Dynasty bronze "zun" decorated with four sheep heads, a large and rare inscribed Western Zhou Dynasty bronze water pan, a gold-inlaid Qin Dynasty bronze tally in the shape of a tiger, Han Dynasty jade burial suits sewn with gold thread, and a comprehensive collection of Tang Dynasty tri-colored glazed sancai and Song Dynasty ceramics. The museum also has an important numismatic collection, including 15,000 coins donated by Luo Bozhao.

Why You Should Visit:
The "Ancient China" exhibit on the lower floor could easily keep you busy for 2-3 hours and the quality of the works is at least comparable to the Chinese section at the Met in New York and Guimet in Paris. Additionally, you're able to see many outstanding visiting exhibitions from other parts of the world.

Tip:
Take a look at the several different sections in the information section before jumping in and decide what is most likely to appeal to you if you have only one day or a half day. Entrance is free but do take your passport/ID with you. Security is tight so expect checks both entering and leaving the museum.