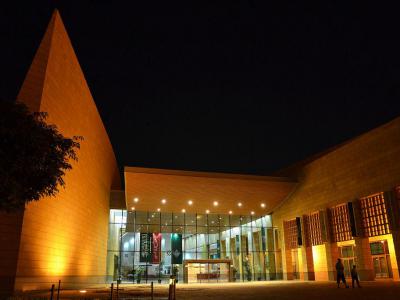 The National Museum of Saudi Arabia was established in Riyadh in 1999 as part of King Abdul-Aziz Historical Center. The Museum is a cultural and civilization center, with a focus on the history of the Arabian Peninsula and the message of spreading the Islamic faith. The sand dunes outside Riyadh inspired architect Raymond Moriyama to design the Museum’s forms and colors. The west façade represents a pointy crescent oriented toward the holy city Mecca. The Museum consists of eight galleries, arranged chronologically: Man and the Universe, Arabian Kingdoms, The Pre-Islamic Era, Prophet Mohammad’s Mission, Islam and the Arabian Peninsula, First and Second Saudi States, The Unification, and The Hajj and the Two Holy Mosques (this last one displays a large model of Mecca and its surroundings). It is an institution that’s very rich in facilities and exhibitions that create a modern educational environment, which any visitor will appreciate.
Image by Lluís Sala on Flickr under Creative Commons License.
Sight description based on wikipedia

Want to visit this sight? Check out these Self-Guided Walking Tours in Riyadh. Alternatively, you can download the mobile app "GPSmyCity: Walks in 1K+ Cities" from iTunes App Store or Google Play. The app turns your mobile device to a personal tour guide and it works offline, so no data plan is needed when traveling abroad.

Create Your Own Walk in Riyadh

Creating your own self-guided walk in Riyadh is easy and fun. Choose the city attractions that you want to see and a walk route map will be created just for you. You can even set your hotel as the start point of the walk.

Riyadh is the capital city of the Kingdom of Saudi Arabia. Once a small walled city, today it is a vibrant metropolis and one of the fastest developing cities in the world. In the last 100 years the city population has grown from 18,000 to over 5 million people. Riyadh has developed culturally, but especially economically beginning with the 1950s when the petroleum industry boomed. This...  view more