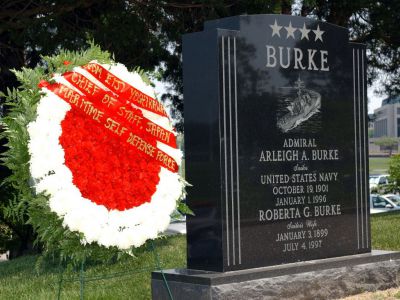 The United States Naval Academy Cemetery forms part of the Naval Academy complex, and dates back to 1868 when the Academy purchased a 67-acre piece of land, called Strawberry Hill, in a bid to expand after the American Civil War. Within a year of its acquisition, part of the property became the cemetery.

Right from the outset, the cemetery has served as the final resting place for Medal of Honor recipients, Superintendents of the Naval Academy, midshipmen, and former employees of the Academy, as well as hundreds more of the nation's veterans. The cemetery is also home to monuments that do not mark remains, but commemorate the heroism of individuals who sacrificed their life in service to the United States. The Jeannette Monument, erected in 1890, is the most notable such monument, and was built in memory of the men who lost their lives in the Jeannette Arctic Expedition. In 1987, the Naval Academy constructed a columbarium adjacent to the cemetery on College Creek.
Image by Chris Lussier on Wikimedia under Creative Commons License.
Sight description based on wikipedia