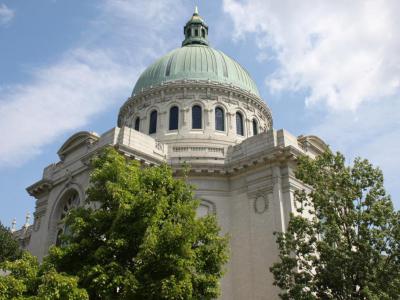 The United States Naval Academy Chapel is one of two houses of worship on the grounds of the academy, offering Protestant and Catholic services. The Chapel is a focal point of the Academy and the city of Annapolis, and is an important feature which led to the Academy being designated a National Historic Landmark in 1961.

The Naval Academy Chapel was designed by Ernest Flagg. In 1940, it underwent remodeling which doubled the seating capacity to 2,500, to accommodate a larger brigade of midshipmen. In 1995, the Chapel was featured on a U.S. Postal Service postage stamp, honoring the Academy's 150th anniversary. The United States Naval Academy Chapel boasts a 268-rank organ controlled by one of the largest drawknob consoles in the world. Beneath the main chapel is the crypt of John Paul Jones. There is also a small chapel of St. Andrew which has been used for smaller weddings.
Image by Fr James Bradley on Flickr under Creative Commons License.
Sight description based on wikipedia