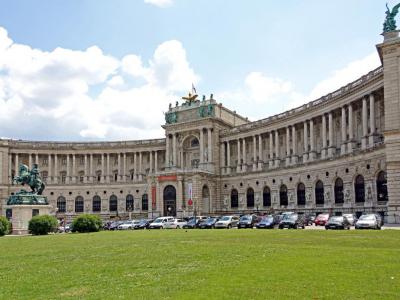 The Neue Burg, or New Palace, is the most recent and grandest addition to the Hofburg complex in Vienna. This massive, curved new wing of the Imperial Palace in Heldenplatz was designed by Ringstrasse architects Karl von Hasenauer and Gottfried Semper. Its construction lasted from 1881 to 1913 embodying the last gasp of the Habsburg Empire strained by aspirations of independence from its domains, when the personal prestige of Emperor Franz Joseph was seemingly the only thing capable of keeping it together; the Empire fell apart only five years after the Neue Burg was completed. Although it was not an ideal moment to embark on such a construction, the works continued nonetheless and, when finished, the palace served as the residence for Archduke Franz Ferdinand. In 1938, it was here that Adolf Hitler, standing on the terraced central bay, proclaimed the Anschluss (unification of Austria and Germany) to the tens of thousands of the Viennese gathered outside.

Today, the Neue Burg houses the reading room of the national library, as well as a number of museums. Among them are the Ephesos Museum – displaying ancient artifacts from the Greek and Roman site of Ephesus in Turkey, plus findings from the Greek island of Samothrace, excavated in the 1870s; the Hofjadg und Rüstkammer (Collection of Arms and Armour) – featuring fine weaponry remarkable in terms of size and workmanship (filigree inlay on swords, medieval ceremonial saddles and jeweled Turkish and Syrian maces), the core of which are the personal armories of the Habsburgs; the Sammlung Alter Musikinstrumente (Collection of Ancient Musical Instruments) – housing impressive Renaissance-period musical instruments, including pianos owned by Beethoven, Schubert and Haydn, and the world’s oldest surviving claviorgan (1596); and the Weltmuseum Wien (Museum of Ethnology) whose galleries explore the aspects of travel, anthropology and ethnography with exhibits from across the globe. The Hofburg Congress Centre is also located here.

Why You Should Visit:
To get a feel for Vienna's central district and its main landmark – one of must-dos at Hofburg.
Home to three collections of the Kunsthistorisches Museum Vienna.

Tip:
Young people under 19 enter for free.
Wheelchair rental possible (reserve one day in advance). Notification by telephone approx. 15 minutes before arrival at the front desk suggested.
The collection of Ancient Instruments and that of Arms and Armor are only accessible via elevator at the ticket counter level; the Ephesos Museum can only be reached from this level via steps (total 60 steps).
Image Courtesy of Flickr and Dennis Jarvis.
Sight description based on Wikipedia.