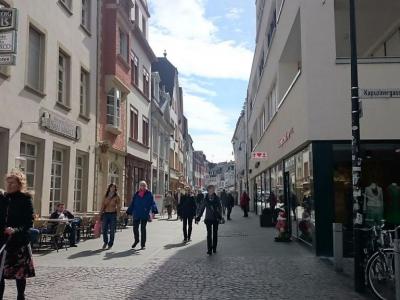 New Street is a wonderful shopping and cultural destination with a long history. New Street was built on the grounds of the ancient Roman Forum, which had a hall and marketplace, and was part of the city center. After the hall fell into disuse, a "new street" was built through the ruins.

Remnants of the hall's walls can be seen in some of New Street's cellars. During Medieval times, a city wall gate stood at the street's southern end. The street has been known as Nova Platea, or "New Street," since 1150.

After World War II bombs damaged many of New Street's buildings, the buildings were rebuilt and reorganized. Today, visitors will find 22 cultural monuments on New Street. For example, 23 New Street 23 dates to 1595 and features Gothic architecture. 42 Neustrasse dates to 1596 and has original Roman bricks in its cellar.

Visitors can walk New Street and check out various shops, restaurants, cafes, and galleries. Shoppers will find designer clothing, jewelry, ceramics, books, and more. At the Gallery Network, visitors will find exhibitions, a beautiful garden, and events such as concerts, lectures, and readings.
Image Courtesy of Wikimedia and Mmkay.